I was able to head to Europe during the holiday season to help support the US Ski Team at the 2021-2022 Tour de Ski. After a very successful period 1 of racing, Team Birkie athlete Zak Ketterson qualified to race the World Cups at the Tour de Ski in Switzerland, Germany, and Austria. Because of the way the US Ski Team is structured, any athlete qualifying for World Cups would need to bring their own wax tech to help support them at the races. Leo, Caitlin, Zak, and myself all agreed that sending me over to help support Zak would give him the best possible chance at success. Below is a recap of the races and my time in Europe.

We had 7 wax technicians in the truck each working directly with either one or two athletes. In addition to the 7 wax techs, we had Matt Whitcomb, who is the Head Coach for the team, come in and help with any testing we would do. With 8 people capable of testing we could go pretty deep into testing product, structure, and application. Nearly all of the glide testing done with the US Team is done by glide outs. This will give a very objective result to which wax or structure is running fastest. Usually we would have two or three teams of 2 out on the test loop running glideouts, and a “concierge” that would record all the data. 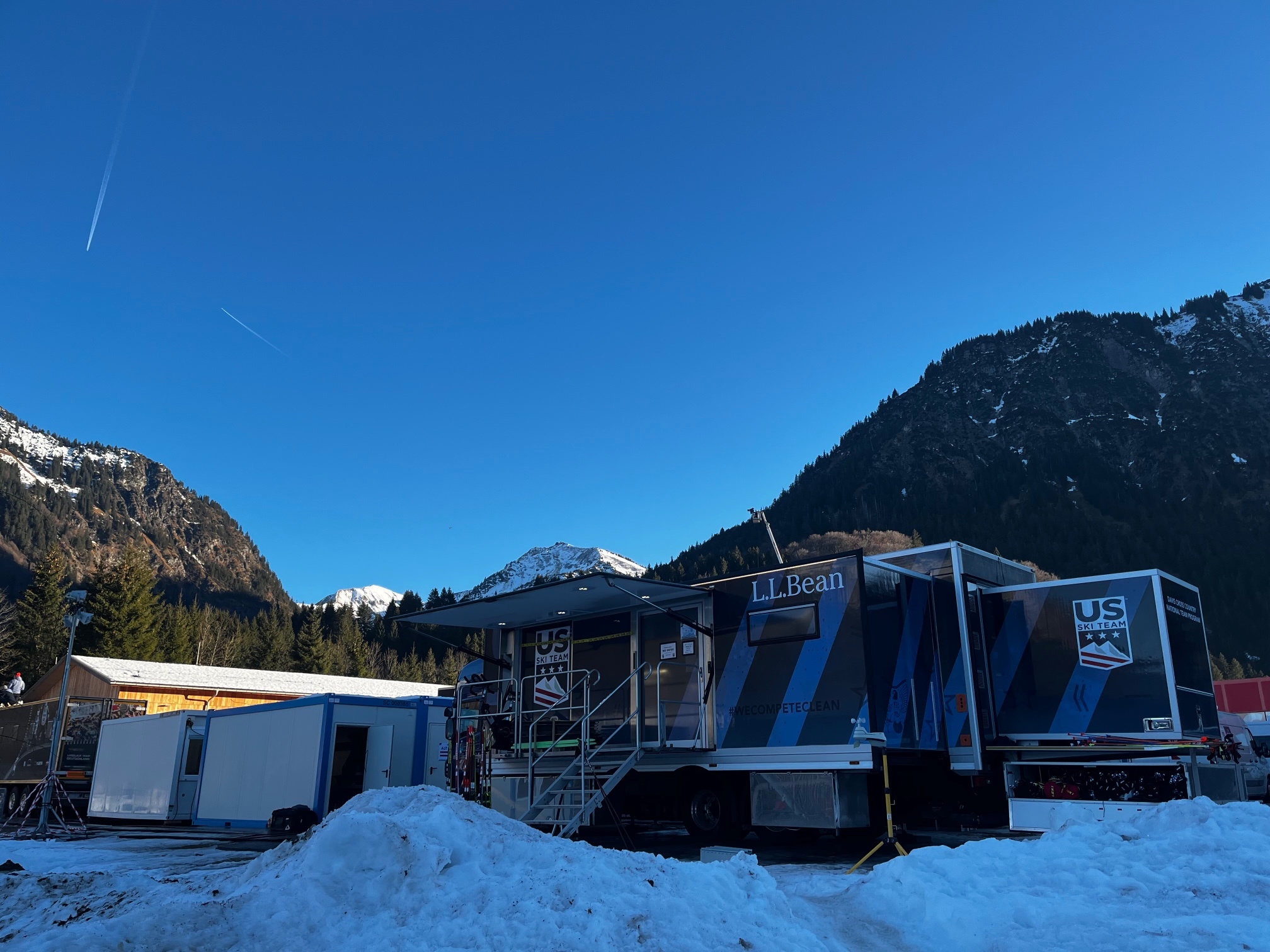 Once all testing is done, the wax techs would meet with athletes and head out on course and test their skis and pick out the fastest pair. After selecting the fastest pair of skis, the mad dash back to the wax truck would start to quickly apply the paraffin, powder, topcoat, and structure. We could get all of these steps done in ~30 minutes. 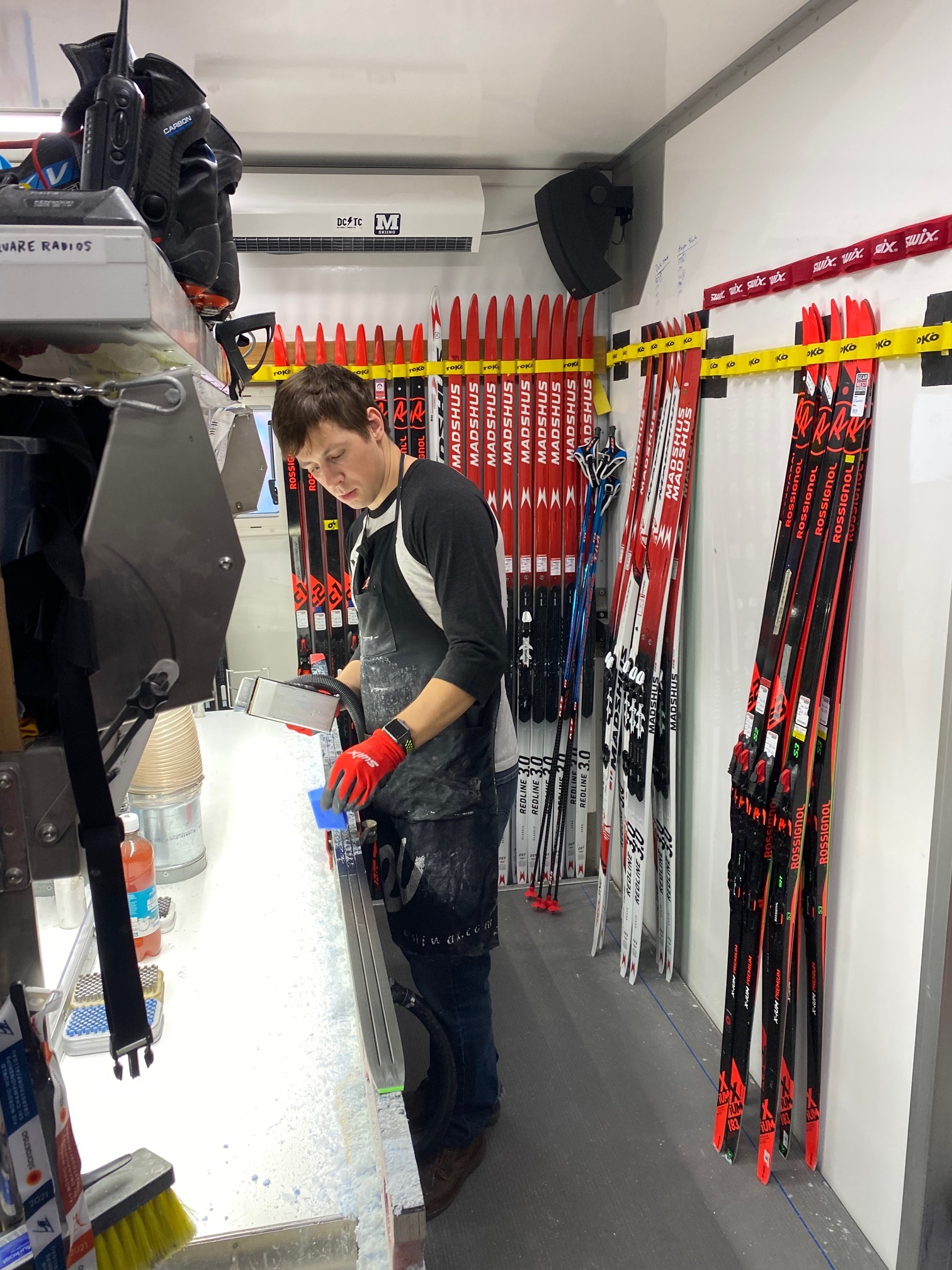 View of my wax area for the week inside Yolanda. (Photo cred: Zak Ketterson)

The sprint course in Lenzerheide is very interesting as it is one of the simpler courses on the World Cup circuit. From the start it is an uphill to a plateau, turn left and go all the way back down to the lowpoint, turn left again and you will start lap two going back uphill. Pretty much a “go fast, turn left” type course. We had a great day with some very competitive skis. Jessie Diggins was able pull out the victory and Julia Kern narrowly missed the podium with a 4th place finish on the day. 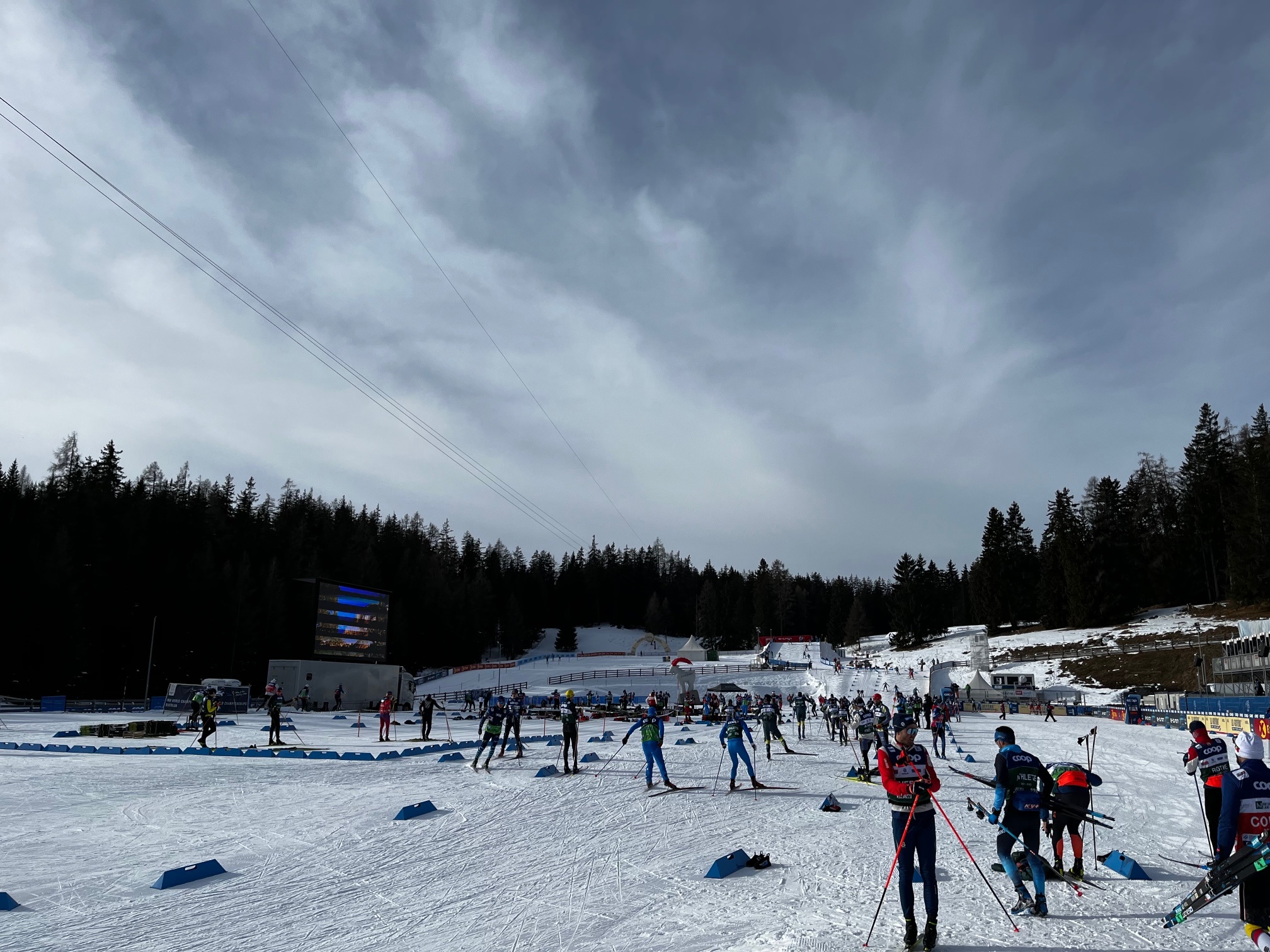 Busy stadium in Lenzerheide on the official training day.

This was one of those days where even before you show up to the venue, you know that it is just going to be a mess. The forecast for the days was 34-35 degrees and 2-3 inches of snow. Any time it is above freezing, but you have accumulating snow it makes kick waxing very very tricky. We spent a long time working with different kick wax and klister options trying to find something that was working well. We thought we had found a decent klister option that we could cover with hardwax that was fast and didn’t ice too much. But in the final moments of testing with athletes we could tell that this was just not going to be an option and reverted towards the back-up plan of zeroes. We made sure that we had zeroes prepped the day before knowing that it was likely we would end up needing them for the race. 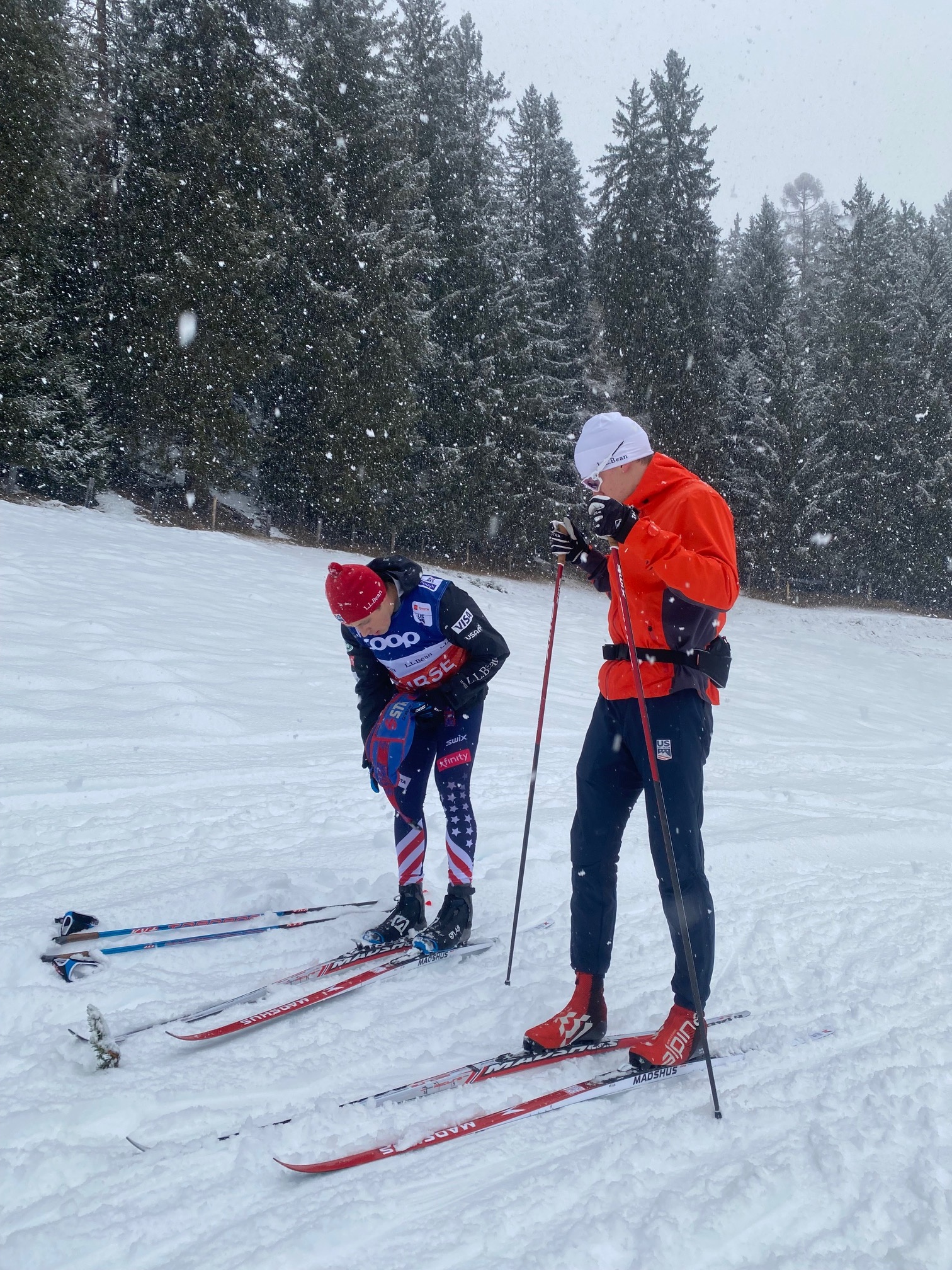 Out testing classic skis with Zak prior to the interval start classic race in Lenzerheide. (Photo cred: Matt Whitcomb)

Looking back at this race specifically, I really wish that we made the call to switch to zeroes earlier in the day. Looking at the forecast we were assuming that it was going to be zeroes and should have spent some time making sure that the skis were prepped correctly. While I don’t think it ultimately would have changed the results significantly, it would have made me feel a bit better at the end of a day when I thought our skis were just in the mix rather than at the top like the day before.

This was a fun one. The course in Germany was wicked fast and some of the descents were pretty gnarly. On the mens course which was just a little bit longer, the downhill at the top of the course was downright scary. I actually decided after my first time going down the hill I was okay and didn’t need to do that section again!

Panoramic view of leaving the start area in Overstdorf.

For the mass start race we had some really good skis. And I mean REALLY good. It is very rare, especially at this level, to see advantages as big as what we had. If you watch the replays and pay attention to the American skiers, you will notice the distance gained or made up on every downhill. And then in the womens race…Jessie Diggins finish. Can’t say much more about how fast those skis are. Not often that you see a finish sprint happen with freeskating. 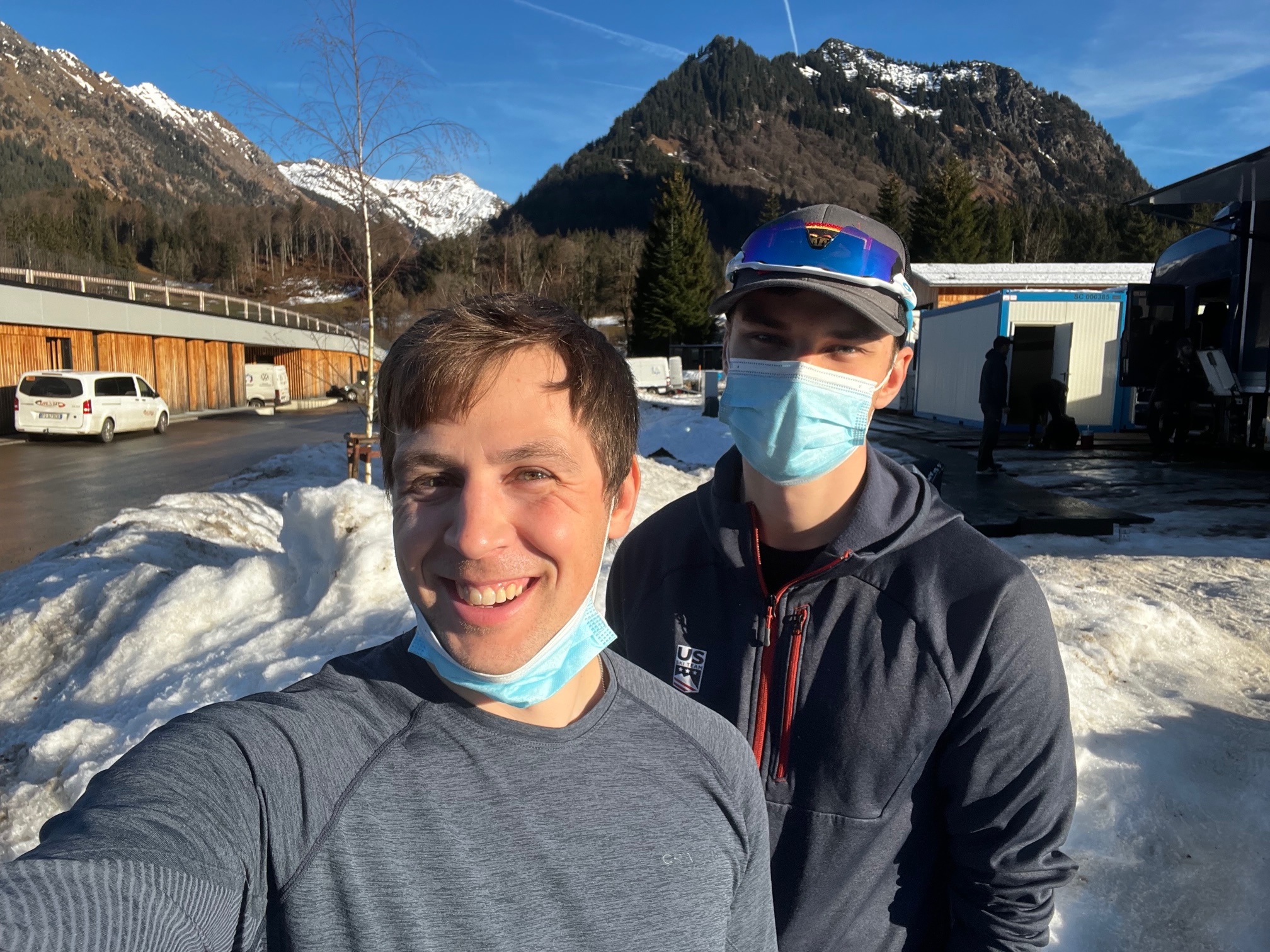 Great to be able to work along side my brother at the Tour de Ski.

Classic days are definitely much more time consuming that skate days. We still need to test the glide waxes out, but also need extra time scheduled to apply the kick wax to the athlete skis prior to them arriving at the race venue. Generally we try to make sure that we get all of the glide and kick testing finished roughly 1:30-1:15 before the beginning of the race. This will give us about 15-20 minutes to get skis prepped for athletes to test. During the test window with athletes we will also have an additional tech or two to make a confirmation call on the fastest glide waxes. 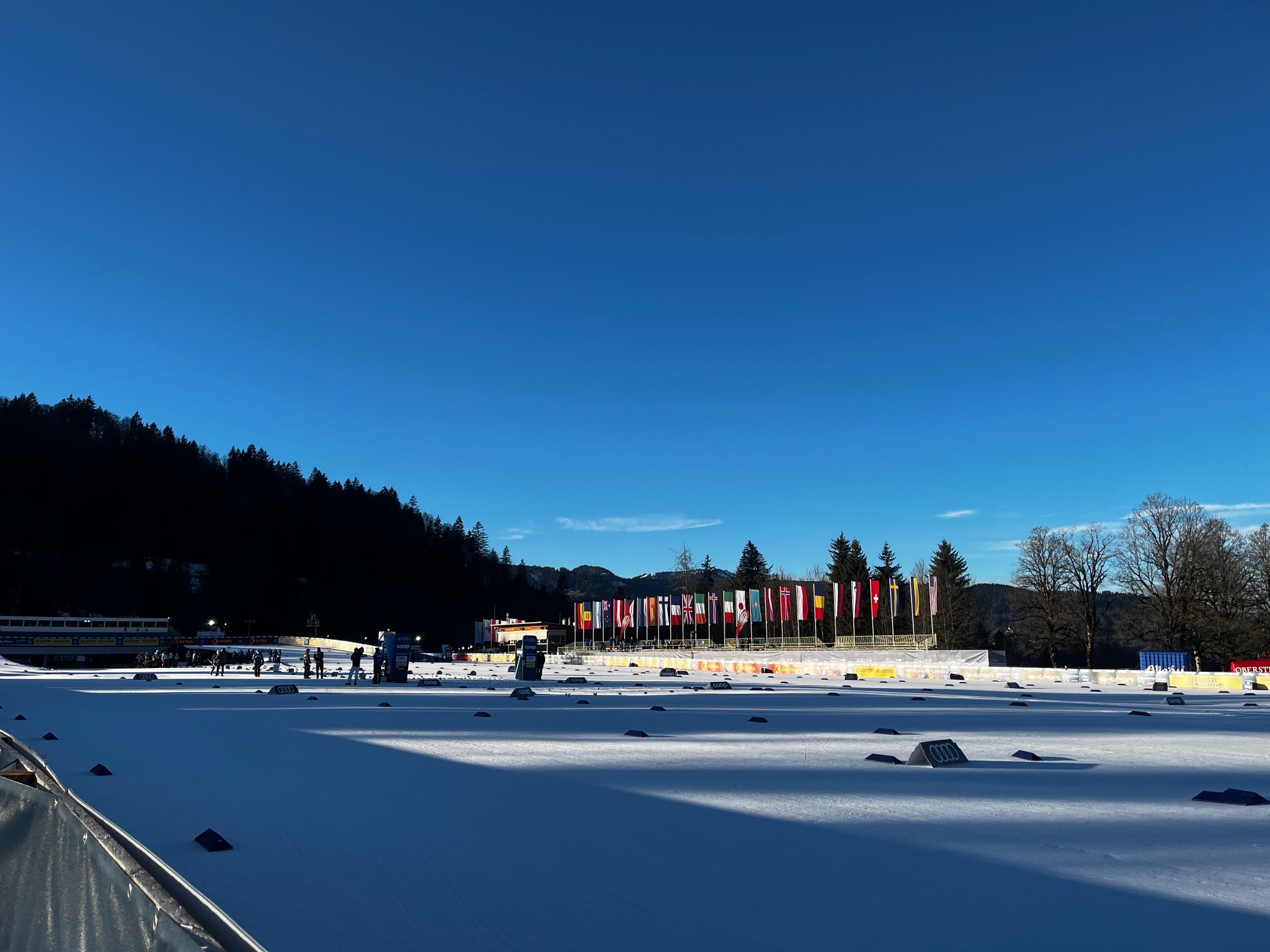 View of the stadium in Oberstdorf.

One of the other issues with this timeline (and it is not just seen at the worldcup level), is that there can be a lot of time between testing on the course and the actual race. This can mean that course conditions can change enough between testing and the race to make a significant difference in how the skis work. Working directly with Zak we noticed that the while the temperature didn’t really change between the testing and the qualifier, the course changed. Because the women went first the course broke down a little bit on the hills and made it slightly more difficult to get the kick he was looking for. Unfortunately this meant he narrowly missed out on qualifying for the heats by just over a second.

This was also the day where there was a significant shakeup in the overall leaderboard on the womens side of the race. Unfortunately there was a “tangle” between Jessie Diggins and Frida Karlsson during the first quarterfinal. This caused Jessie to miss out on moving up to the semi’s, and Frida was ultimately relegated and given a 3 minute time penalty. This pretty much was the beginning of the end for Jessie’s run at repeating at TDS champion.

Val di Fiemme was the location that I was most excited about going into the tour. I have watched races here for many years and always thought the venue was beautiful. We were initially very nervous heading into these races as looking at the forecast it showed some very warm conditions. The weather forecast for the previous week or two leading up to the event showed day time highs in the upper 40’s and even into the 50’s. We realized when we arrived to the venue that the weather station nearest the race course was at a slightly higher elevation and on the other side of the valley in the sun soaked city area of Tesero. There was plenty of natural snow on site and we had great skiing.

For the classic race the team was beginning to get quite a bit smaller. We only had 2 guys left racing (Gus and Zak), and five women (Jessie, Katherine, Novie, Sophia, and Alayna). Many of the pure sprinters dropped after stage 4 to focus on rest and recovery for the races later in the season. We could tell going into this one that the skiers that were able to recover well were going to have success. We ended up getting on a klister cover mix for this race and it worked well for the most part. Halfway through the race it began to get a little lean on kick. Normally this wouldn’t be an issue as both Zak and Gus are very strong classic skiers. But in a tour event like this, neither of their bodies were fresh and they were unfortunately not able to get quite as much kick as they were looking for on the days race. 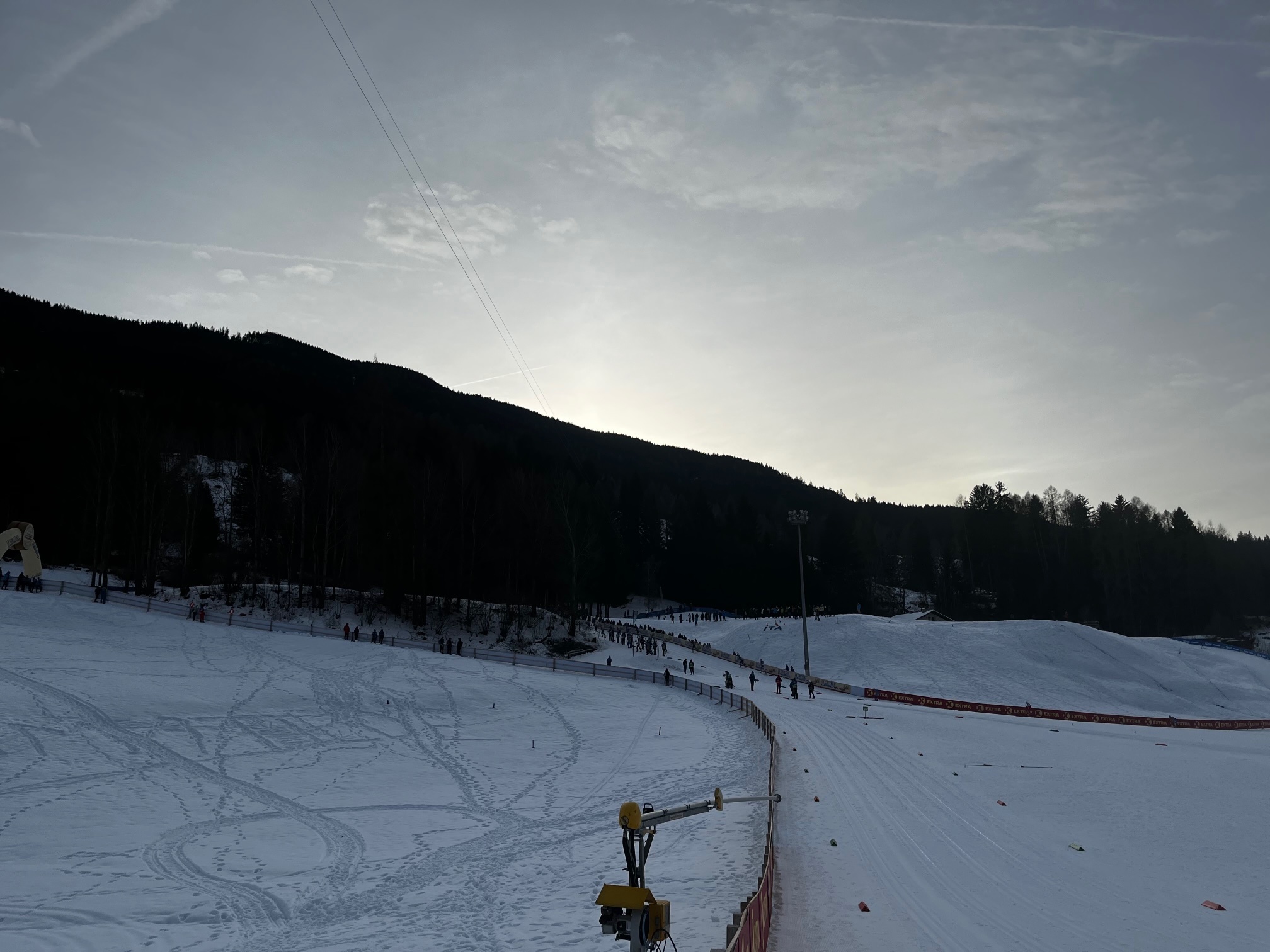 Race course stays in the shade of the mountain for nearly the entire day.

This is probably one of the most iconic World Cup races of the entire year. It is a 10km mass start race that finishes with a final 3km climb up Alpe Cermis ski area just a little ways down the valley. The race would start with 1 lap around on the distance course (2.5km) and then hop onto the Marcialonga trail to the base of Alpe Cermis. From there you would wind back and forth up the climb at gradients up to 28%. This course would show who is the best climber in the field and decide the overall tour champion. 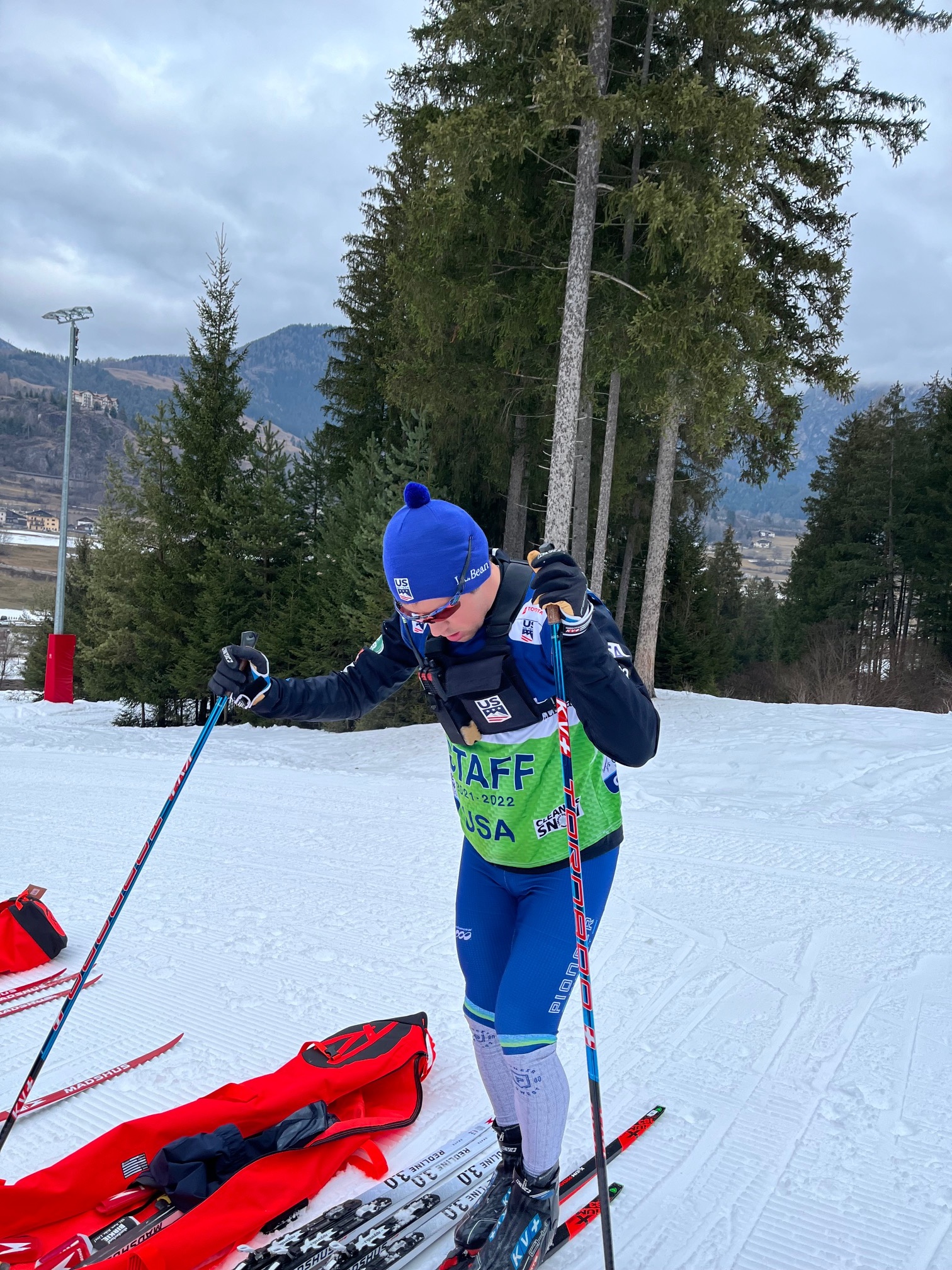 Testing athletes skis at the base of Alpe Cermis before the final climb.

There was some fantastic racing on the women's side, especially from the young and upcoming talent Sophia Laukli and Novie McCabe finishing in 5th and 7th respectively. Zak was the lone American man to ski the race and after a good start, ultimately got worn down on the climb finishing in 48th. 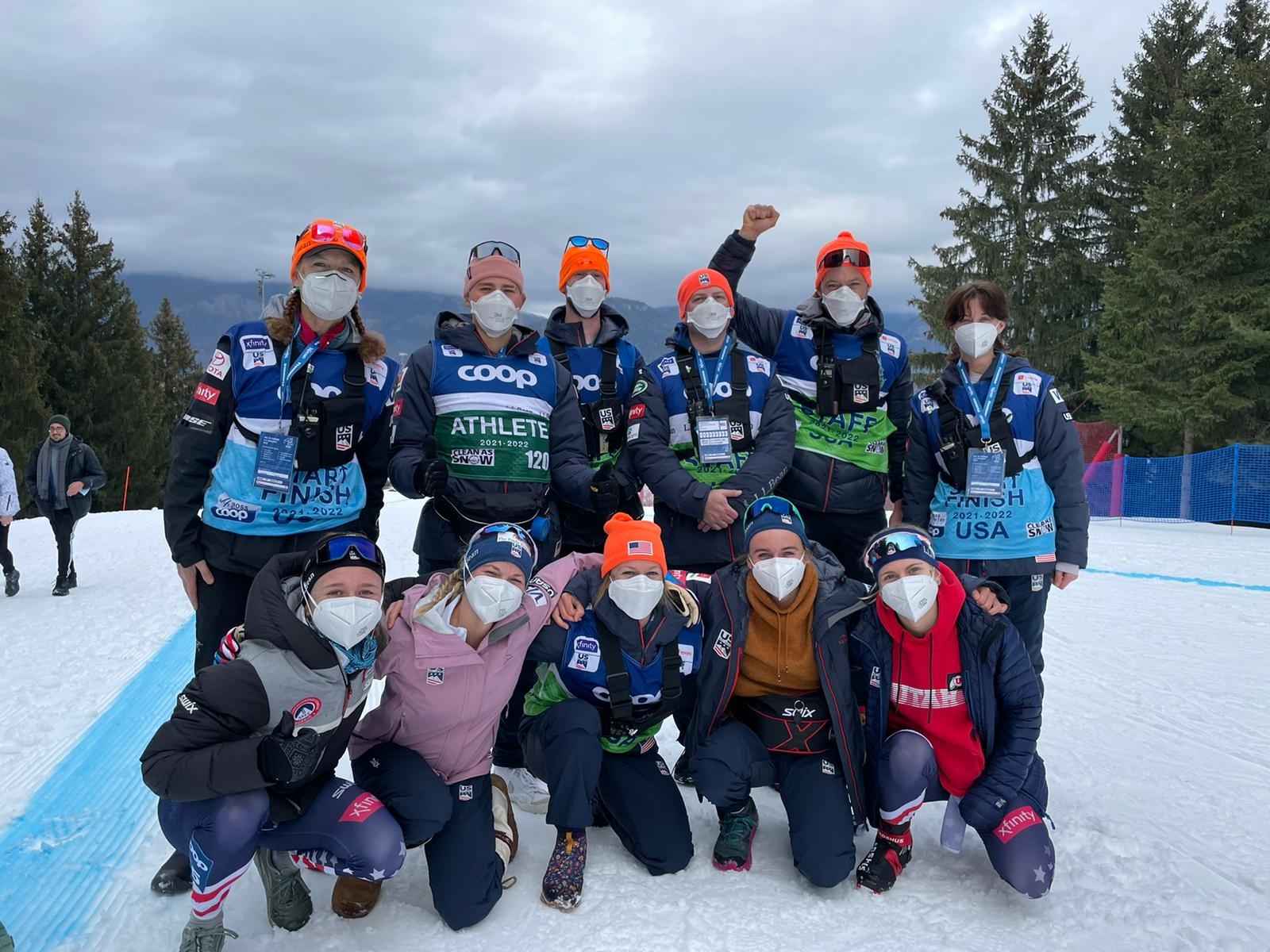 At the end of the tour, I was really happy with the experience, but ultimately very tired. It was a long week with very little breaks for the service techs. We had 6 races in 8 days with two travel days between venues. These travel days we would still make sure we had enough time to get testing in and would prepare for the next day of racing. I would usually arrive at the race venue between 7:00 and 8:00 and we would try to get back home to the hotel for dinners at 7:00. All time in between was pretty much dedicated to waxing and testing. It is a fun lifestyle, but something that probably could not be sustained for much longer than just the tour. 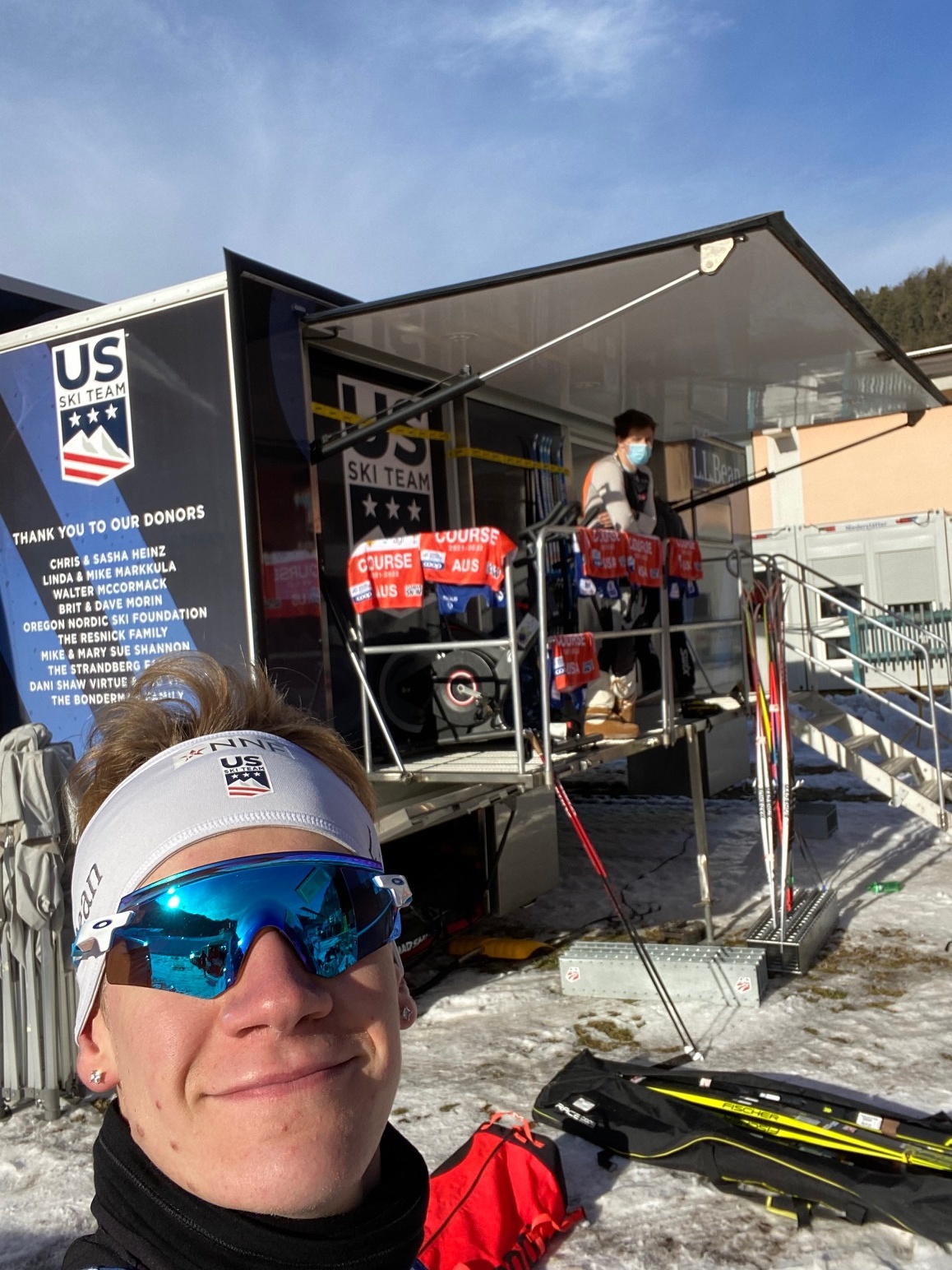 End of the Tour - I am a tired boy. (Photo cred: Zak Ketterson)