I have just returned from a long hiatus from the shop on a trip out west with Team Birkie. For the latter half of July we planned on spending two weeks in Bozeman to work on a base volume block and add in a little bit of altitude training. One of the most important races this season is at altitude in Soldier Hollow, Utah which is at a higher altitude than we are used to here in the Midwest. Being able to learn how our athletes bodies reacts to the altitude will make us better prepared for when they race at Senior Nationals in January.

The primary focus of the training camp was on building volume, but we made sure that the athletes had one or two opportunities to test their fitness and get in a solid L3 session either bounding or roller skiing. Below are some of the “highlight” workouts from the training camp and several pictures from the area.

This was our first ski of the camp and we heard that the neighborhoods in the northern part of Bozeman had some really good roller skiing. Several of the neighborhoods had roads that had some neat terrain and skied like a roller ski track. This would have been a great place to host a sprint race or sprint time trial. As coaches we were able to split off and work with athletes on technique.

Team rolling through on the way to the Summer Ridge neighborhoods.

Just outside of Bozeman on Highway 90 is the trailhead for Chestnut Mountain. It is a 5.5 mile that gains a little over 2600 ft of elevation which makes it the perfect location for a bounding session. With bounding intervals, we do not want anything too steep that makes it too difficult to stay in a bounding technique. The athletes did 5-7 x 8 minutes of L3 bounding w/3 minutes of rest between intervals. This type of a workout is slightly more difficult on the coaches because I cannot stand in one location to get videos and lactates. As the athletes are moving up the mountain, so do I. If they get in front of me, I just have to work harder than them to make sure that I can keep supporting through the workout. During this session I stayed with Julie and Soren through their 6 intervals to help get them lactates. Once finished, we were only about a mile from the top, so I decided to make the extra effort to get to the summit while the athletes turned around to get back down for better recovery. 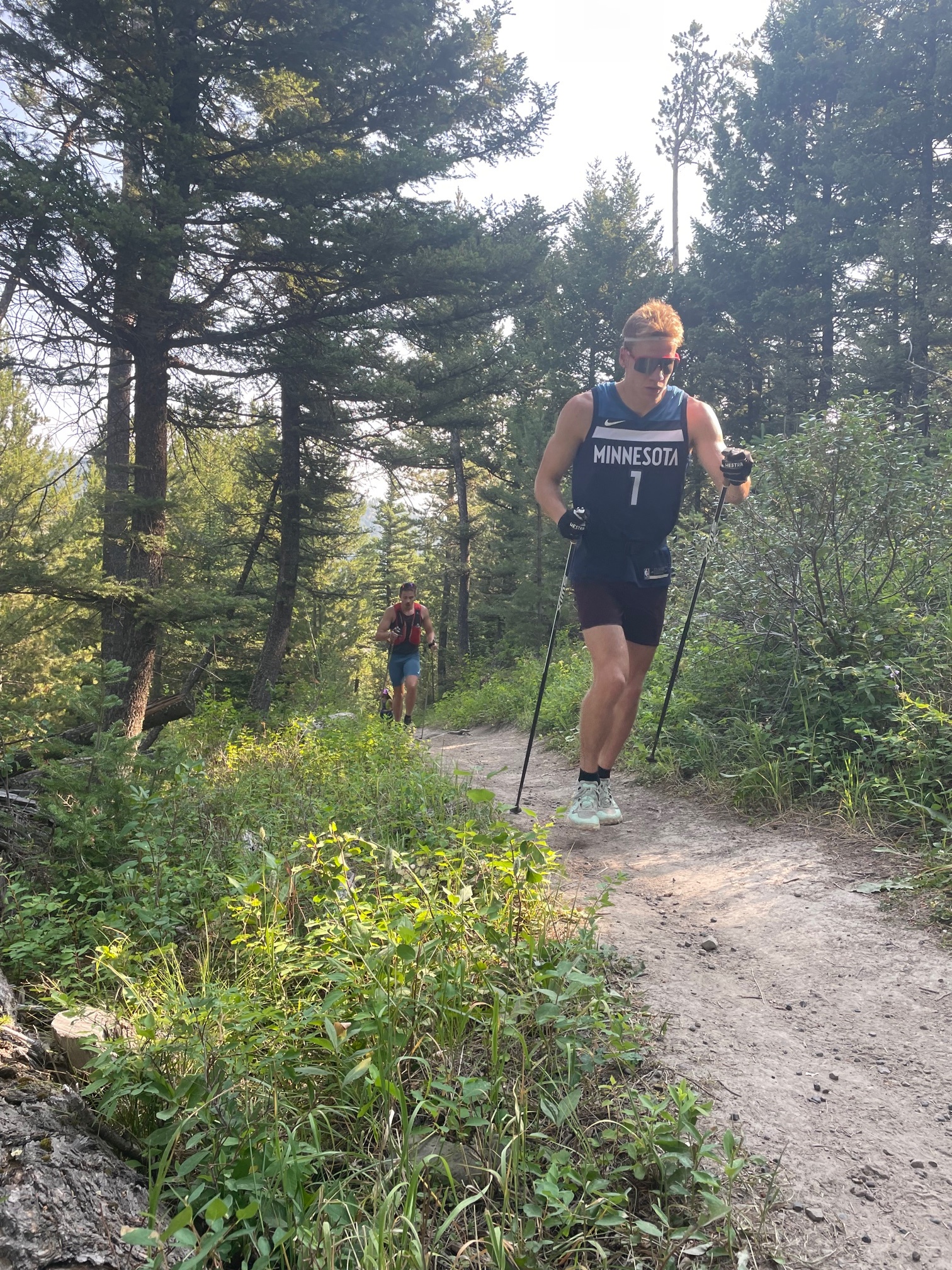 Zak and X-Man crushing it on the first interval. 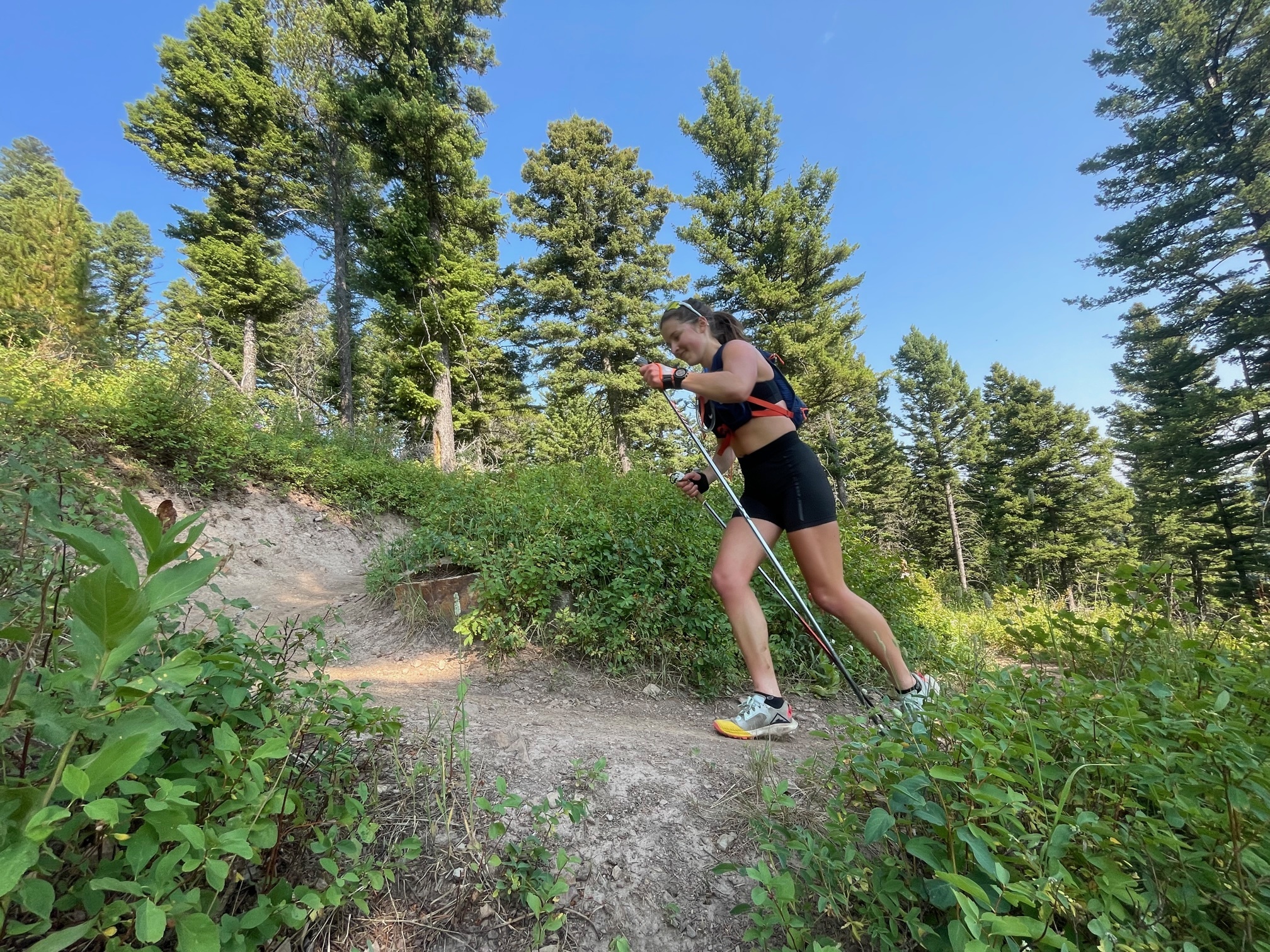 Julie rounding the corner to see more climbing ahead of her. 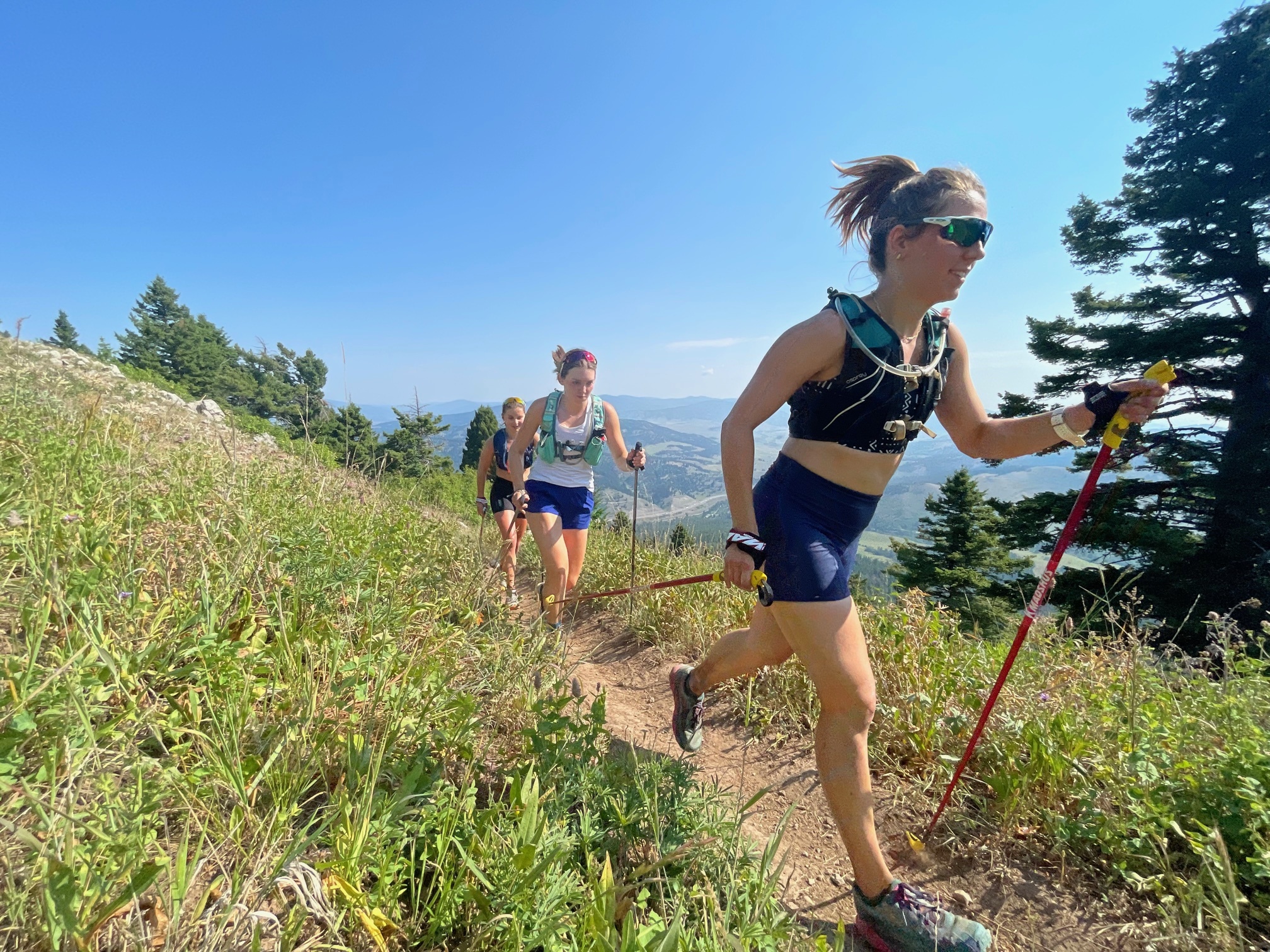 Abby, Jordan, and Julie finishing the last interval together!

View from near the top of Chestnut Mountain.

While the team had a joint practice with BSF in the morning, my wife (Kayla) and I went on a bike ride in the afternoon exploring some of the trails in town. It was pretty cool to see the network of trails that Bozeman had to offer so close to the city center. We made a great loop and that had some amazing views from the top of Burke Park. 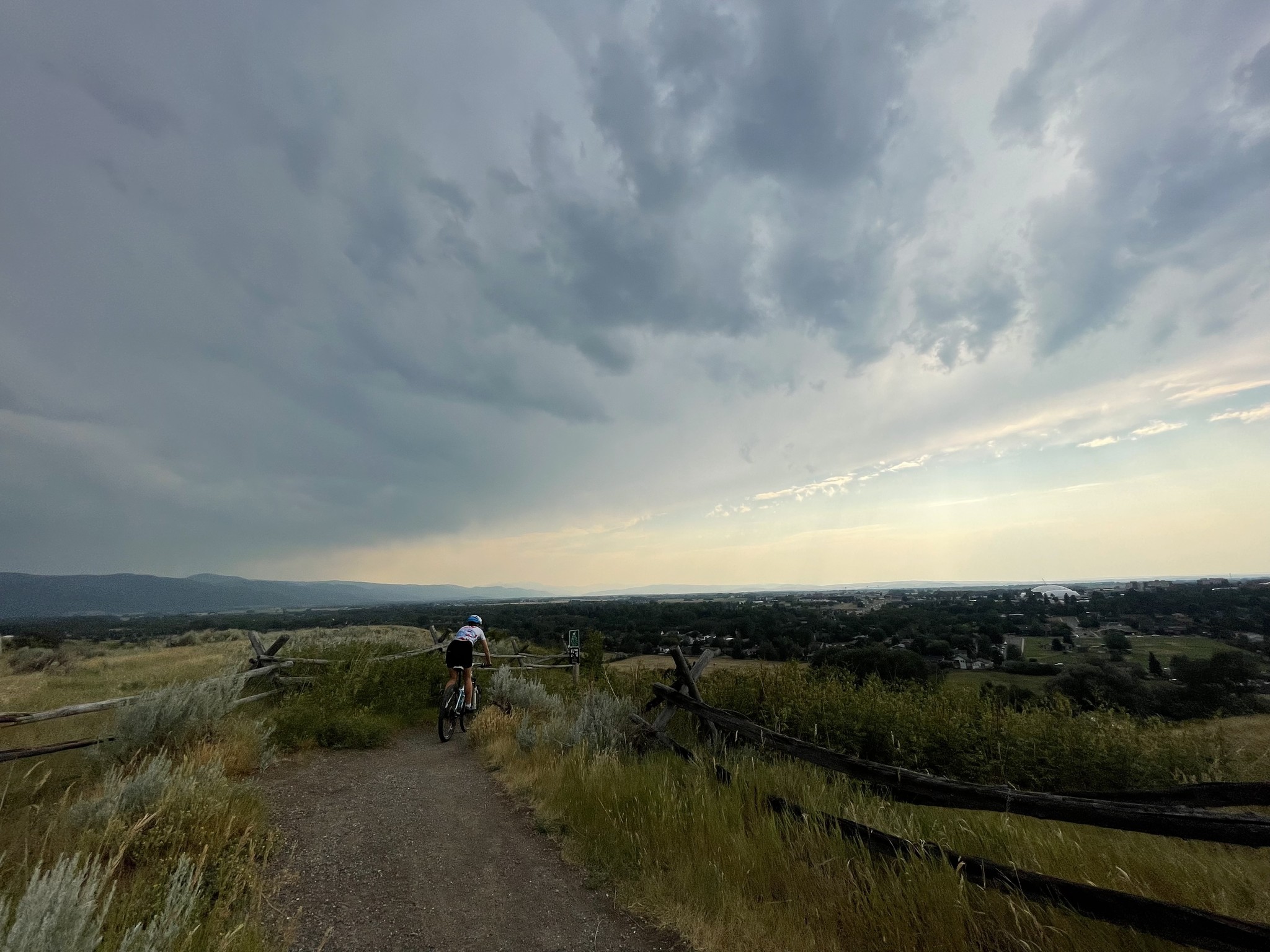 View near the top of Burke Park looking at the thunderstorm passing by the mountains.

We had an easy technique session focusing on V1 climbing in the neighborhoods around the fabled triple tree neighborhoods. The session was fantastic, but my personal highlight came after the workout finished. I decided to ride back to campus via the Main Street to the Mountains trail system. I was able to ride nearly 15 miles back to the MSU campus via single track utilizing some of the trails that I found in the previous day. It was a great experience to be able to ride from the foothills of the mountains to the southeast of Bozeman all the way back to the city. This is a type of trail system that isn’t really seen in the Midwest at all.

Top of Triple Tree climb looking back into Bozeman.

This was a big one! The team set out early to beat some of the heat and smoke that was forecast to come in later during the day to climb Hyalite Peak. This was a 16 mile round trip Run/Hike that climbed 3,600 ft to the top of the mountain. I have not been training nearly as much as the other coaches and athletes so this took a lot out of me. The view at the end was definitely worth the work to get there and the trail leading up to it was just as beautiful. I think that this was my favorite run of the entire training camp. 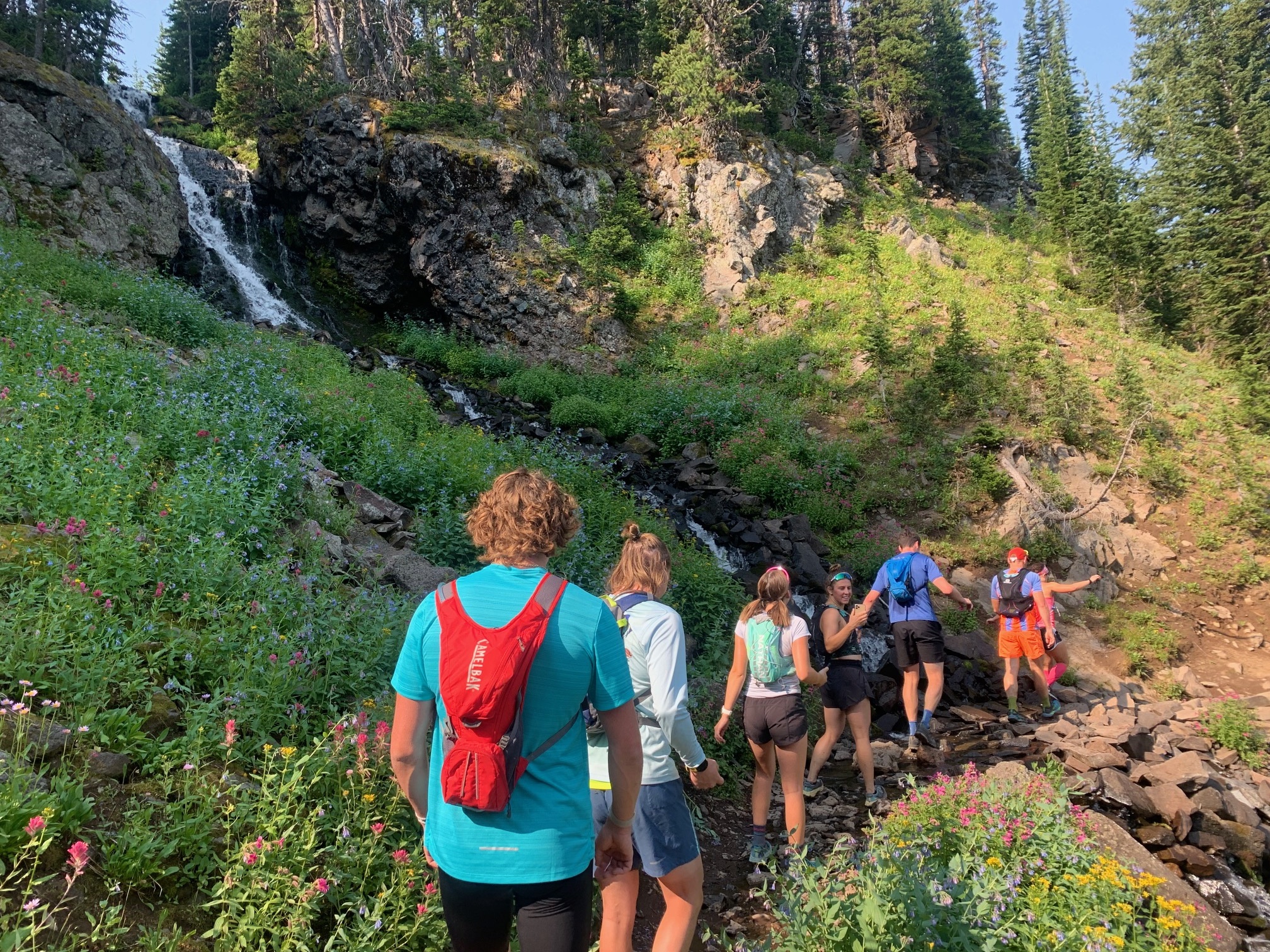 One of many creek crossings on the climb up to the peak. 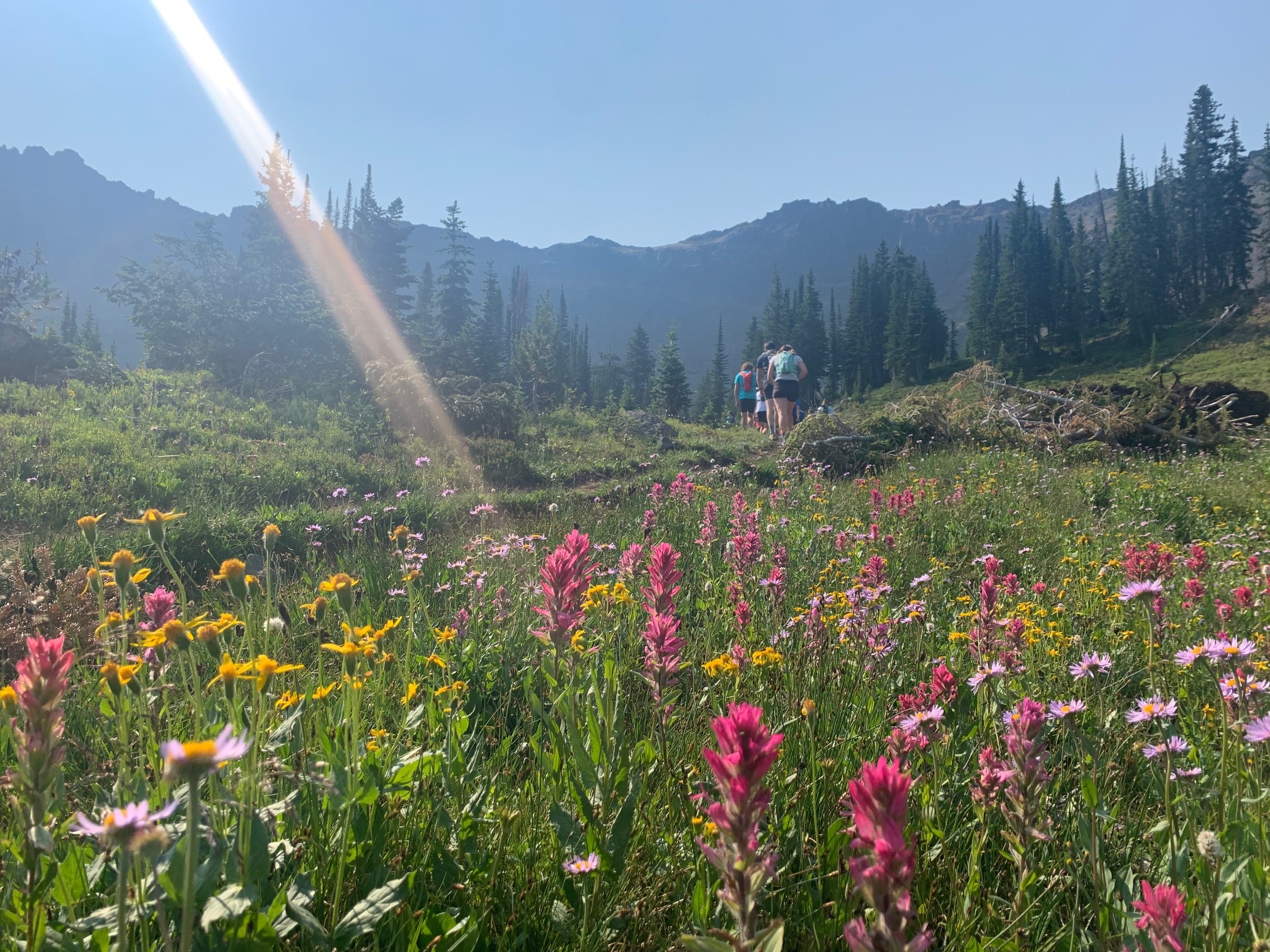 At least there were nice flowers to look at while the head was down climbing up the mountain! 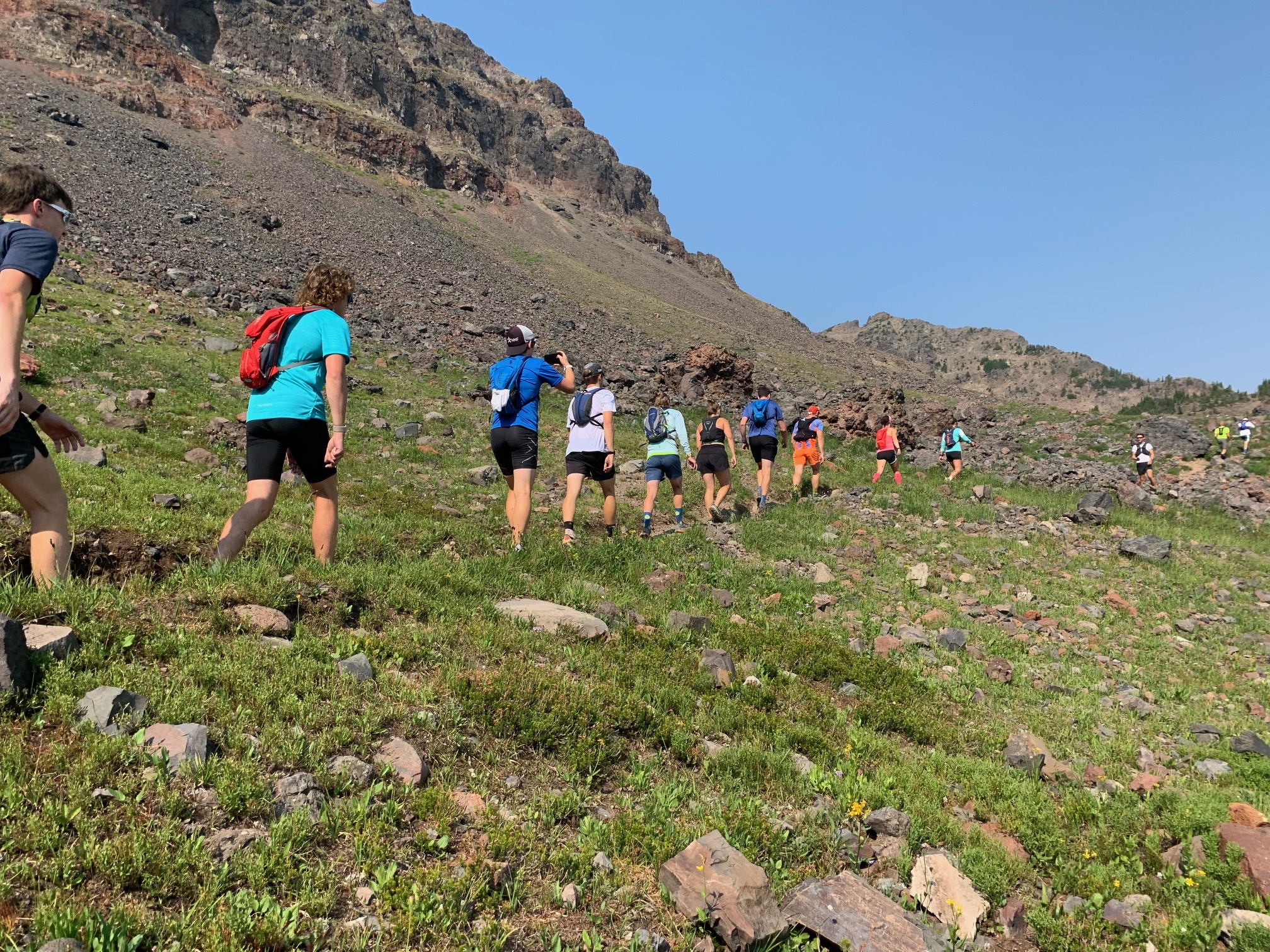 Getting above the tree line! 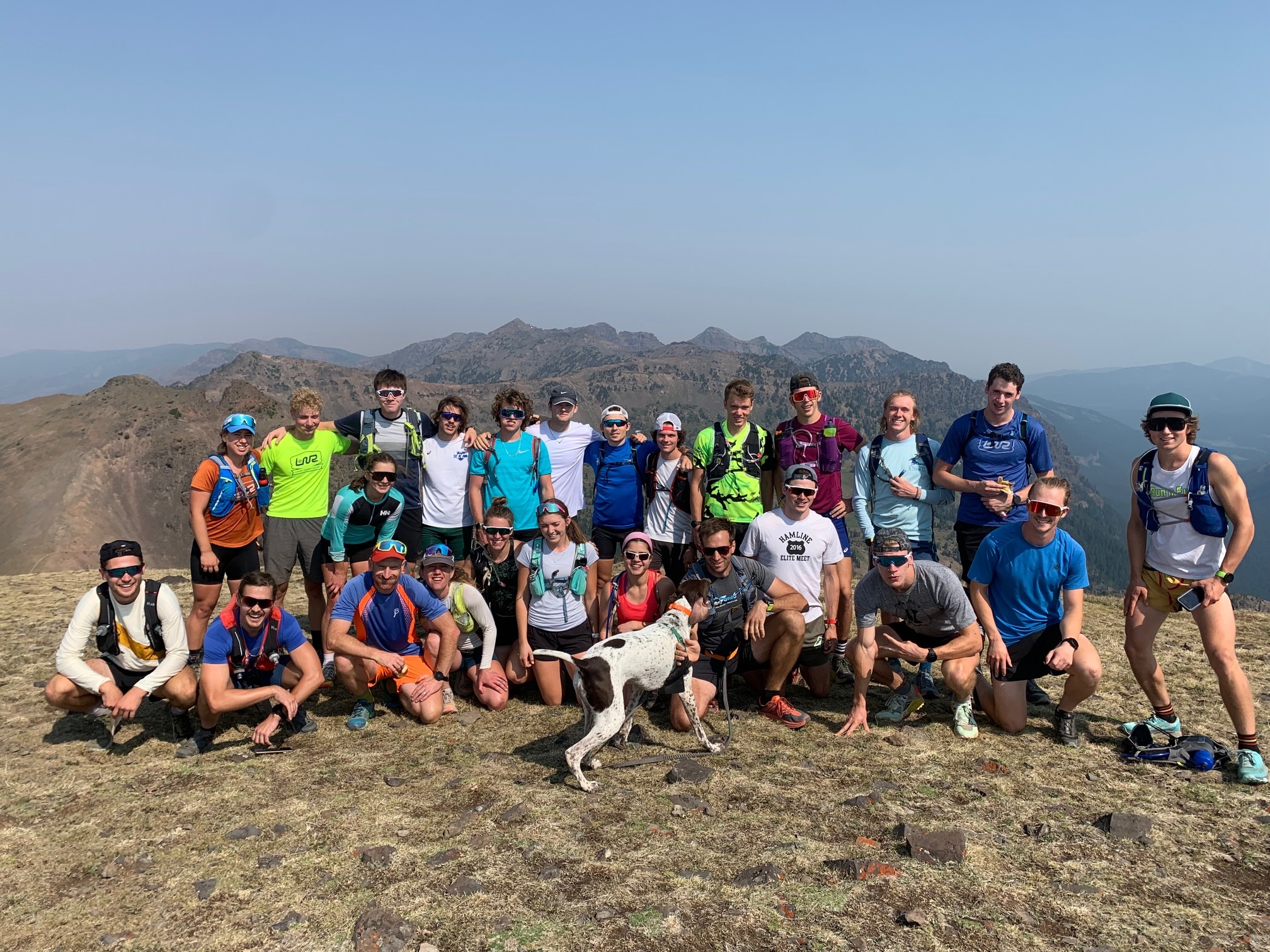 Team picture at the summit.

Another panoramic picture looking down the valley all the way back to the Hyalite resevoir.

MSU exercise physiology department has a roller ski treadmill and the head of the department Dr. Heil was gracious enough to allow us to use his space in exchange for having several of our athletes take part in a study that compares body composition to upper body power output (double poling). We used this precious time on the treadmill to escape the building smoke (still better than the Twin Cities at the time) and work on technique. The athletes did 3-4 x 15 minutes @ L3 swapping between V1 and V2 techniques. We felt that the athletes were able to make some really good improvements in technique while on the treadmill and were able to get a better sense of pacing while at altitude.

Tony working on bringing the hips forward in V2.

This was another fun one! Saddle Peak was a shorter, but nastier run/hike (emphasis on the hike) compared to Hyalite Peak earlier in the camp. This route was only a 10 mile round trip, but climbed over 3,700 ft by the time we made it to the summit. The half mile or so of the climb was spent on what seemed like a near vertical trail climbing to the top. The view was spectacular, and it was very interesting to see the stark contrast in smoke levels between the Bozeman side of the range and the Bridger side of the range.

Julie giving a thumbs up before the final ascent.

Here you are really able to see the differences in smoke between the Bozeman and Bridger sides of the ridge. 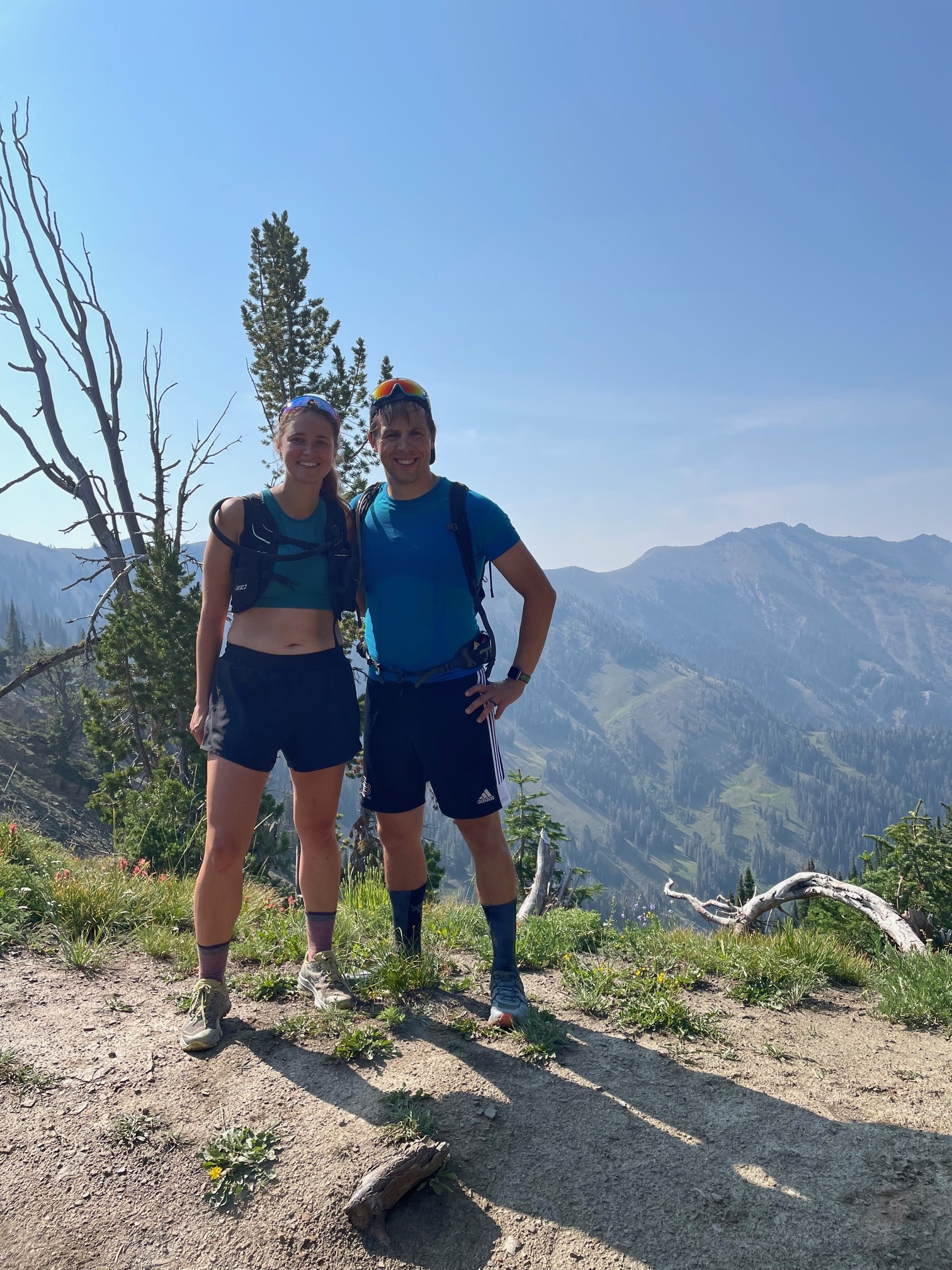 My wife and I taking a picture together before making the tricky descent.

Overall – the camp was a huge success. The entire team had a great time out in Bozeman and the weather cooperated with us for the most part. I want to thank Dr. Heil and the MSU campus for being so helpful in allowing us to run a safe and affordable camp in Bozeman. Without the housing or dining options at MSU I do not think we would have had as successful of a camp as we did.