This will be the first installment of a new blog series that I will be writing. I am the service manager at Pioneer Midwest and am also in charge of any of the programming and coaching that is done through the shop. In addition to being employed by Pioneer Midwest, I am also a coach for the newly founded Team Birkie professional ski team based out of the Twin Cities. Both of these positions allow me the opportunity to travel and coach all around the midwest, country, and world. I want to bring those exciting adventures that I have to you! The first blog will be from the REG camp in Ironwood, MI last week that collected some of the best junior talent in the region followed closely by the Shoreline Sprints race in Rice Lake, WI.

Day 1 - This was a travel day and the only day of the camp that we encountered rain. Once the athletes arrived we went out for a short dryland session that focused on ski walking/ski bounding/moose hoofing and finished with some speeds. 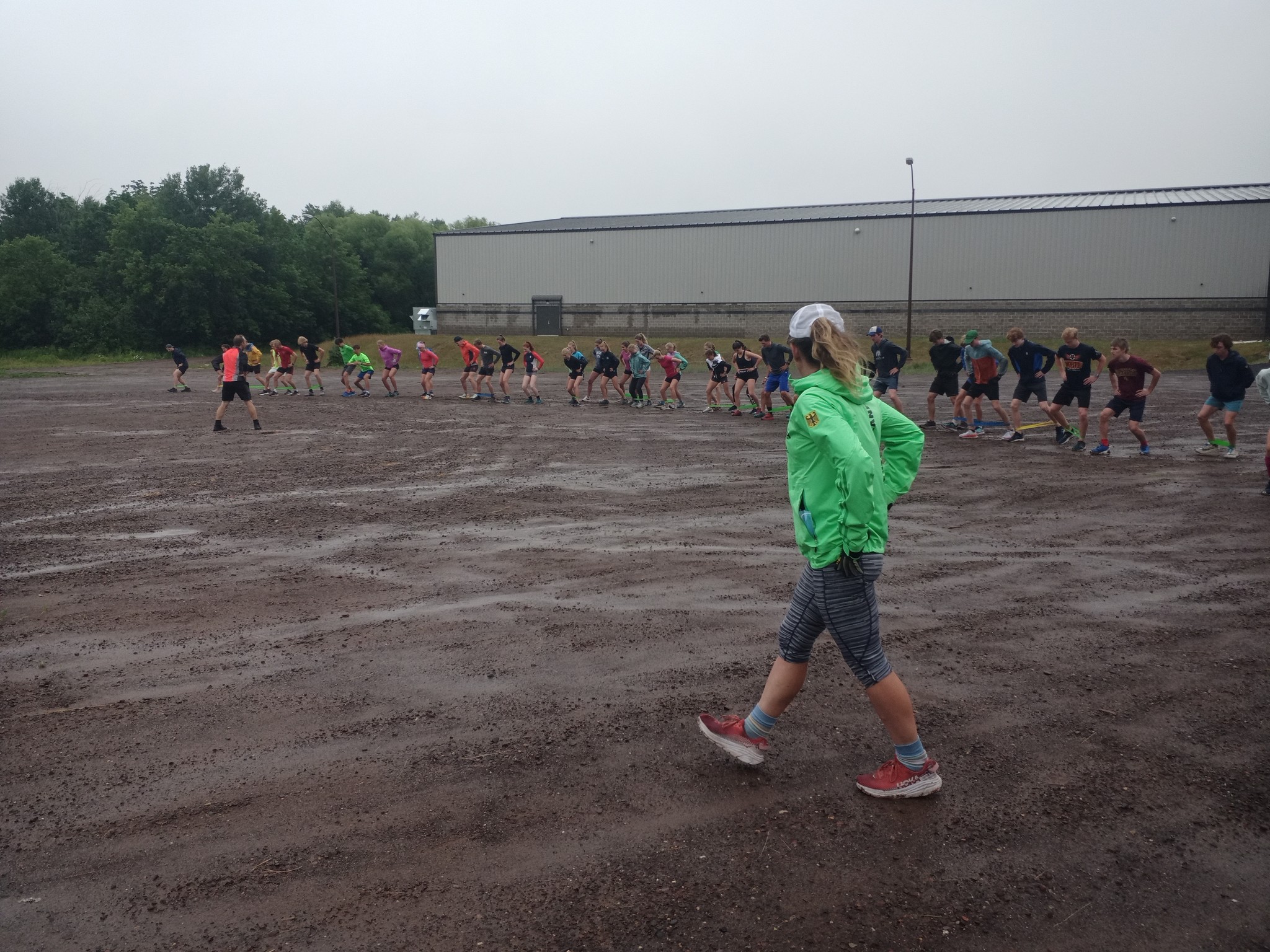 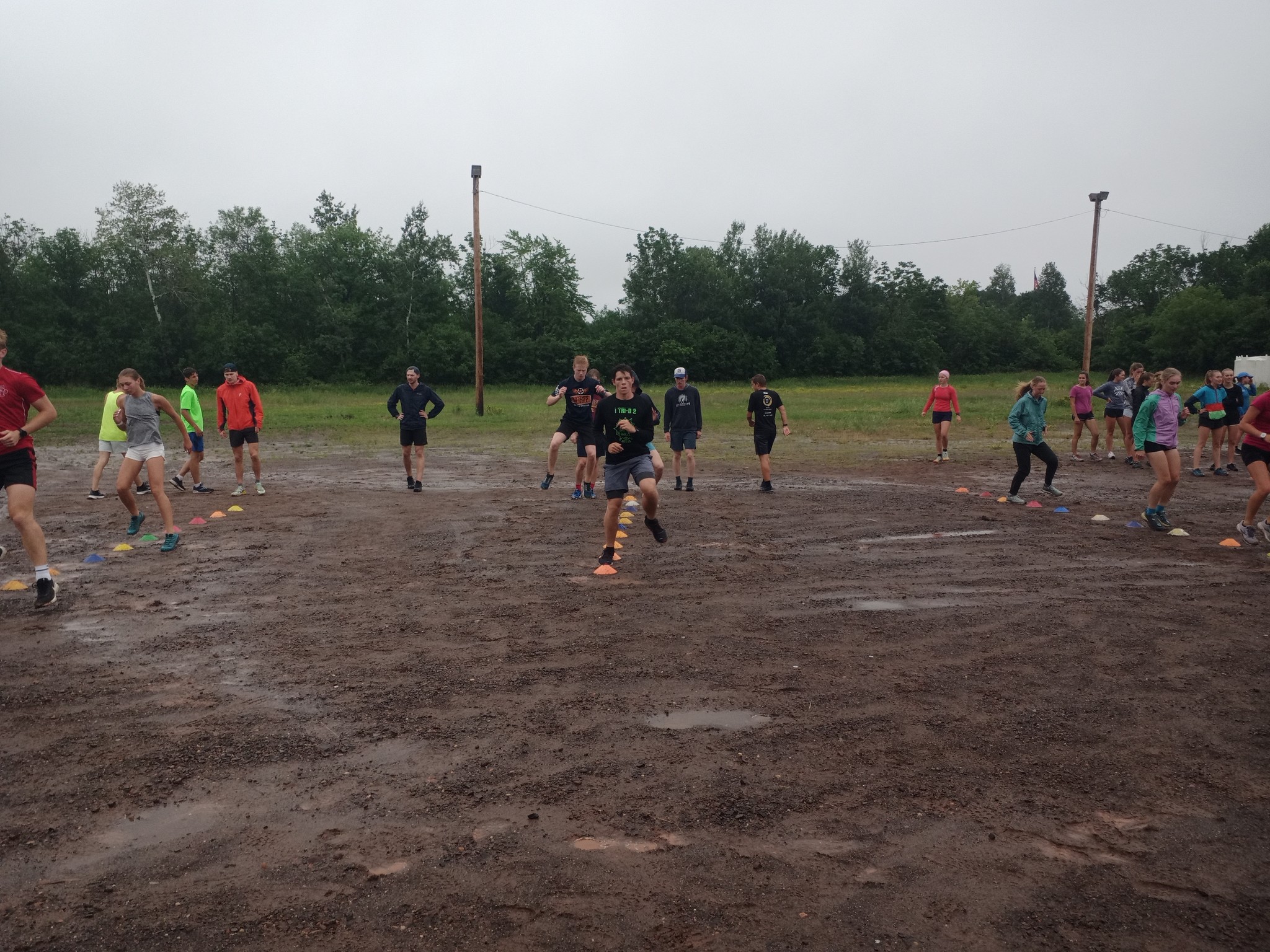 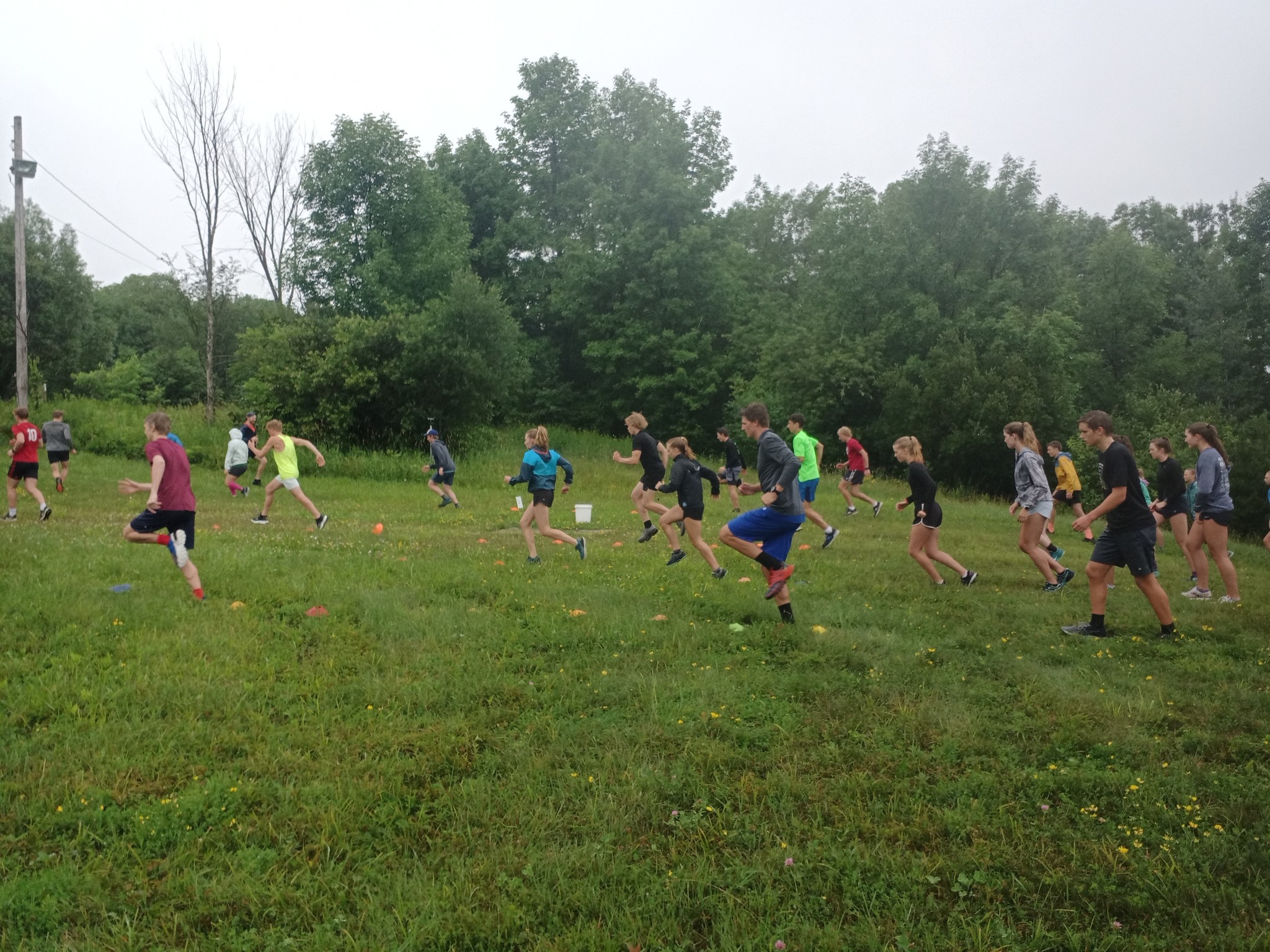 Day 2 – The second day of camp was the big intensity day for the crew beginning with a 1.5 mile uphill running TT at Big Powderhorn Resort in the morning followed by a 1000m Uphill DP TT in the afternoon. The two tests, in addition to the agility test on the following day, as well as the athletes ranking at the end of the 2021 ski season, determines who will qualify for the NTG (National Training Group) camp later this year which will be out in Utah. Athletes showed a lot of grit during both tests. I was incredibly surprised by the young talent that showed that the central region will be strong for many years to come! 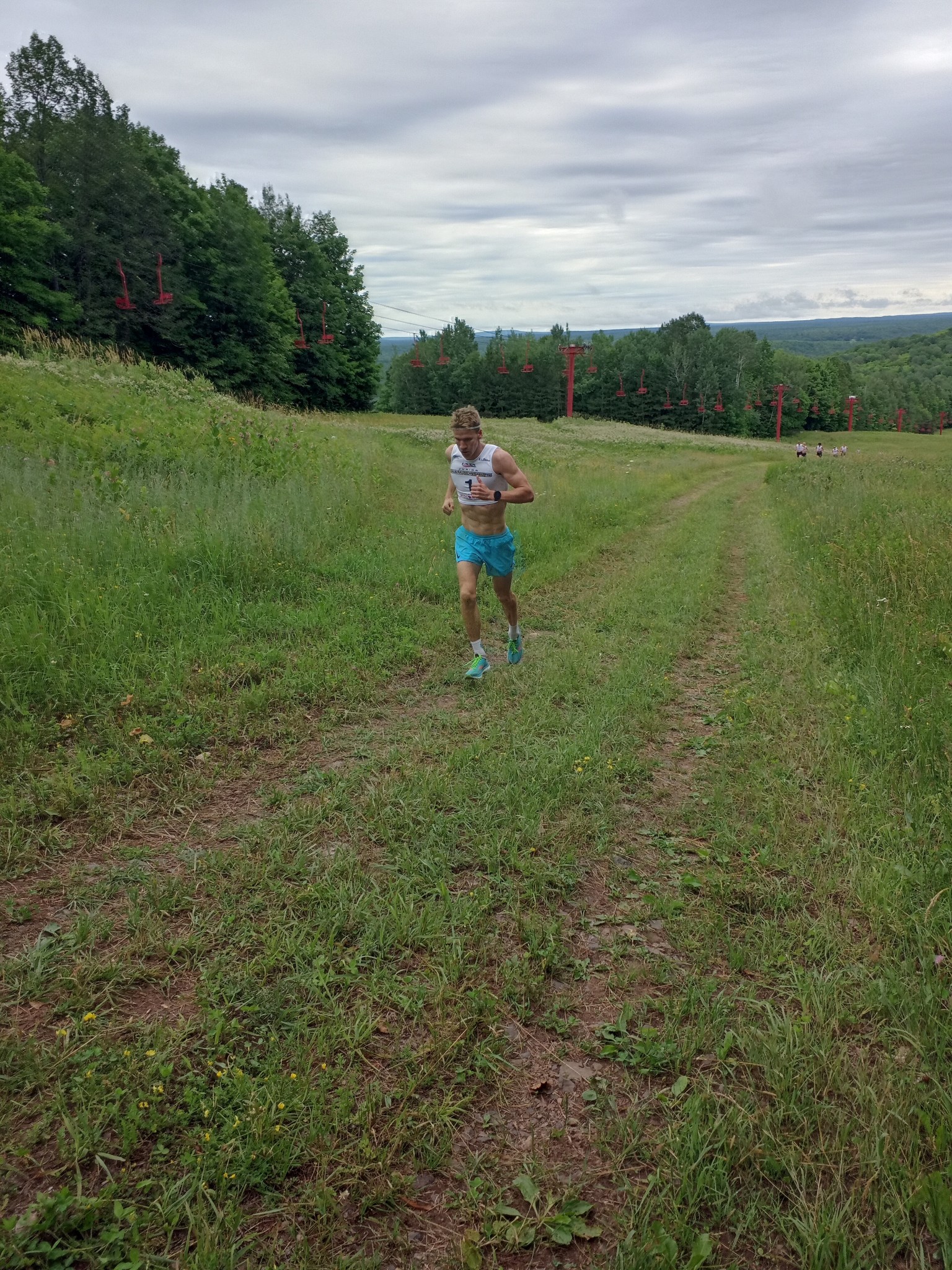 Zak Ketterson from Team Birkie leading the charge in the uphill run. 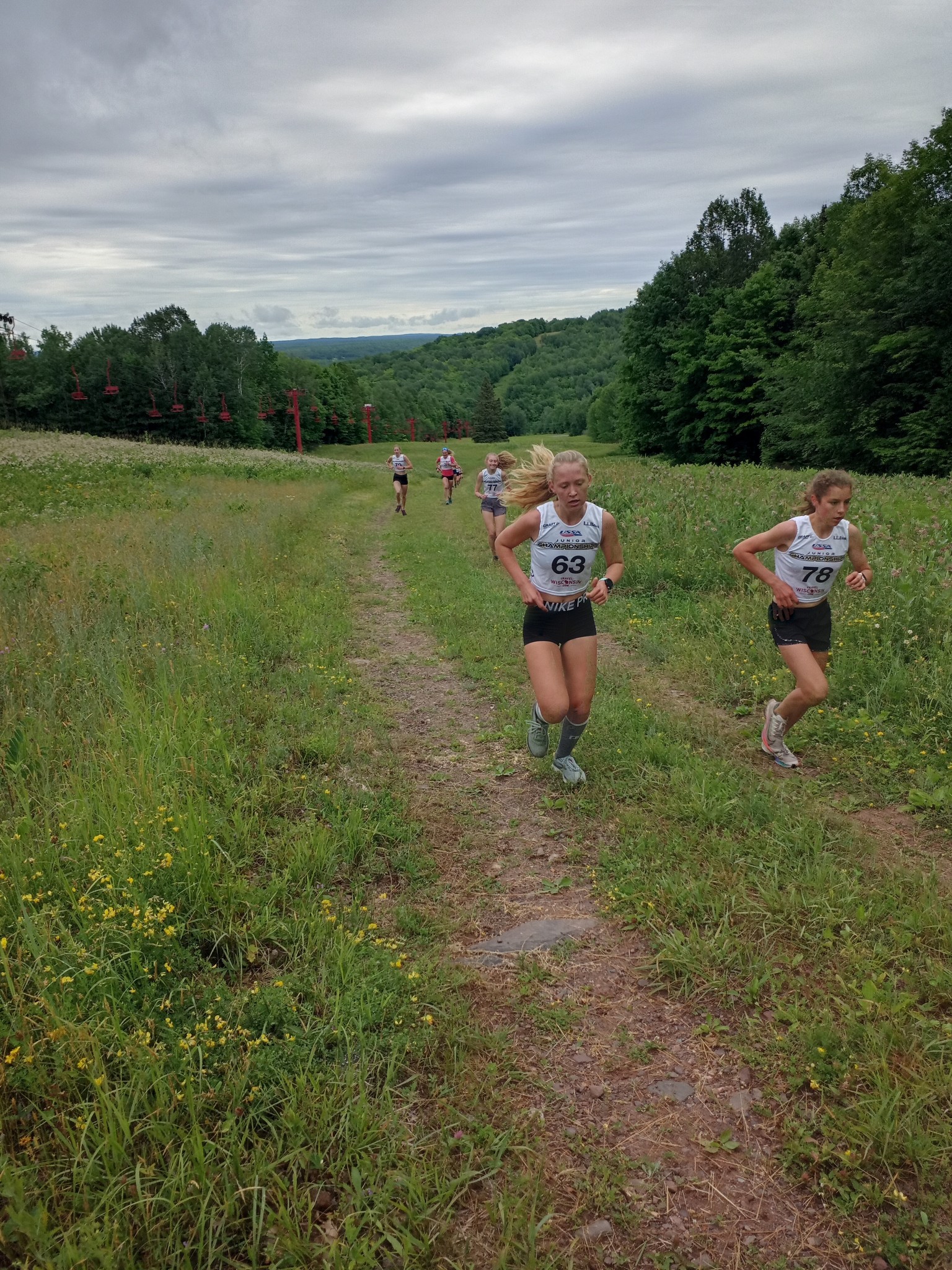 Day 3 – Thursday brought a split session day with a classic technique session in the AM and agility test in the afternoon. The focus in the classic session for the morning was on maintaining a neutral spine position and keeping core engagement while double poling. We noticed during the uphill DP test the day prior that many of the athletes needed to focus on keeping the core engaged when double poling. The agility test in the afternoon was great! We set up a challenging course that pushed the limits of comfort on many of the skiers. Winners were determined by fastest time in combination with the least amount of cones hit. Hitting a cone would add a 1-second penalty which adds up very quickly! 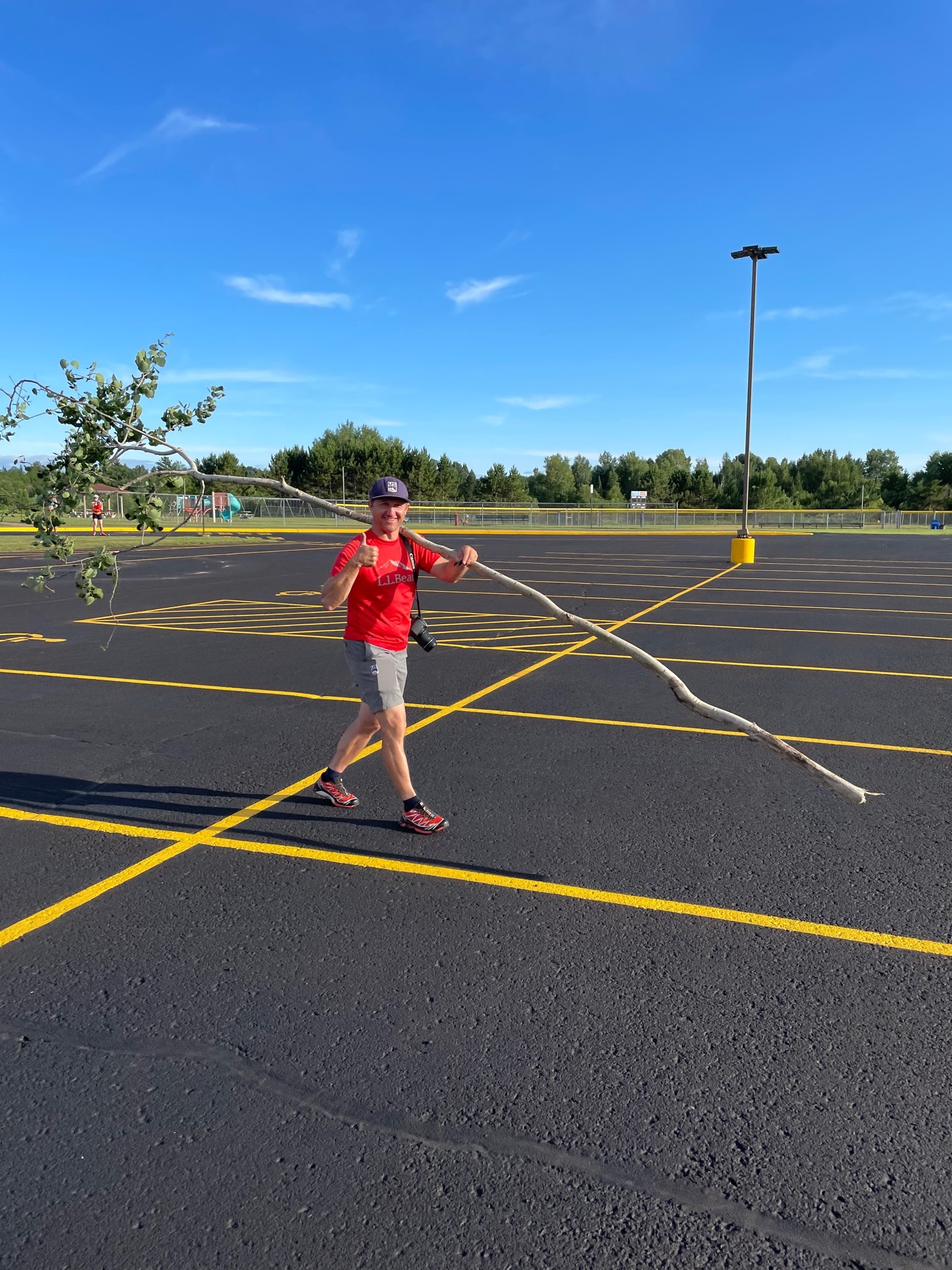 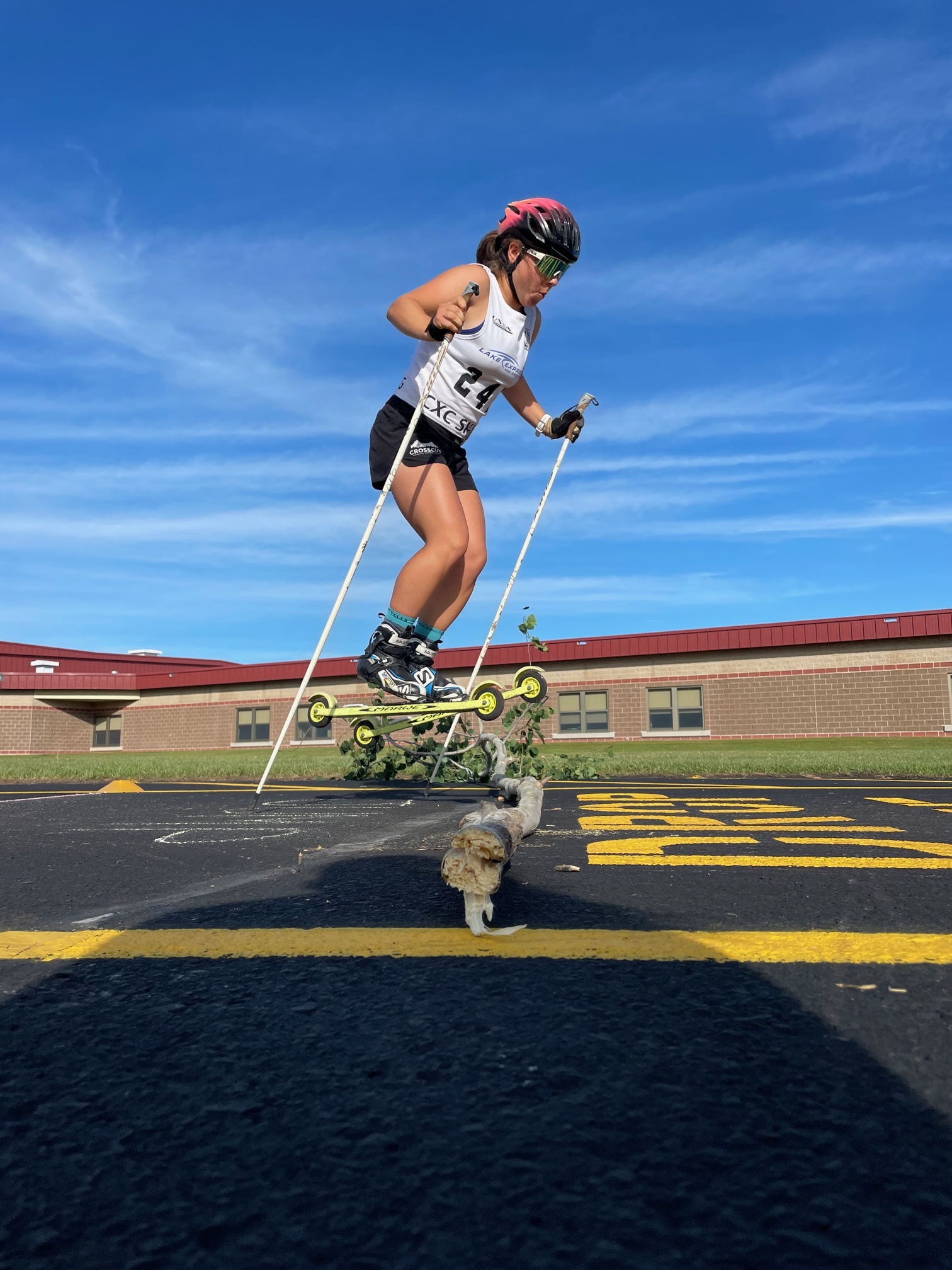 Ingrid Thyr proving that the big stick is not as scary as it seems! 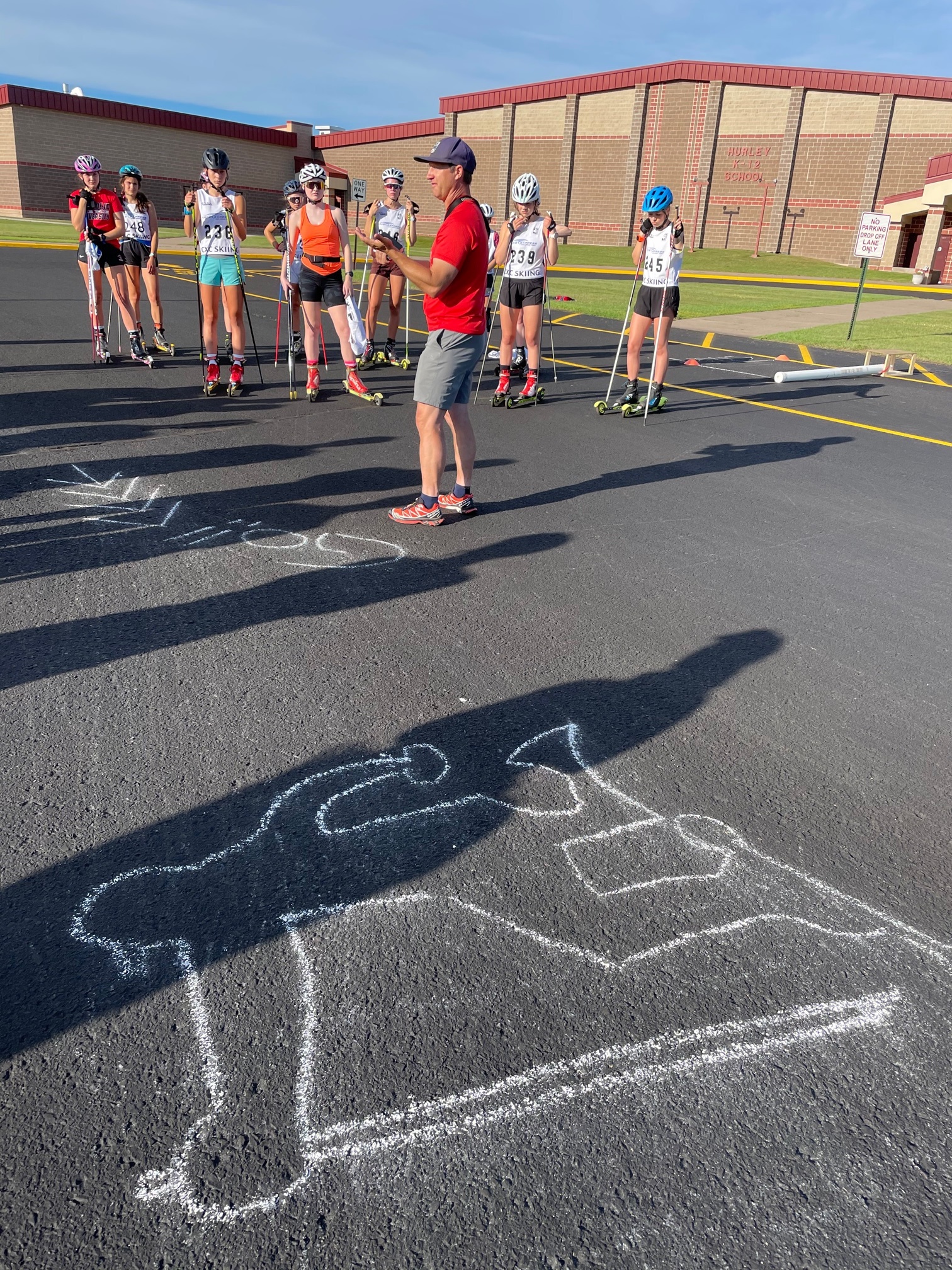 Scene of the crime...coach Fish briefing the women before the start of the time trial.

Day 4 – As the athletes got into the meat of the training camp, we could tell that we needed to maintain focus and engagement during the workout sessions. We decided to hop in the vans and drive out to the Porkies for a combo distance session. Nearly the entire group, including coaches, hopped in for a portion of the roller ski. I hopped on a pair of “coaches skis” that allowed me to ski with Zak Ketterson and Chrisitian Gostout for the entire 21 miles out and back. Once arriving back at the vans, the athletes went on a 45 minute – 1.5 hour run on some of the North Country Trail that runs through the park. The views were great and it felt amazing to hop into Lake Superior towards the end of the run. 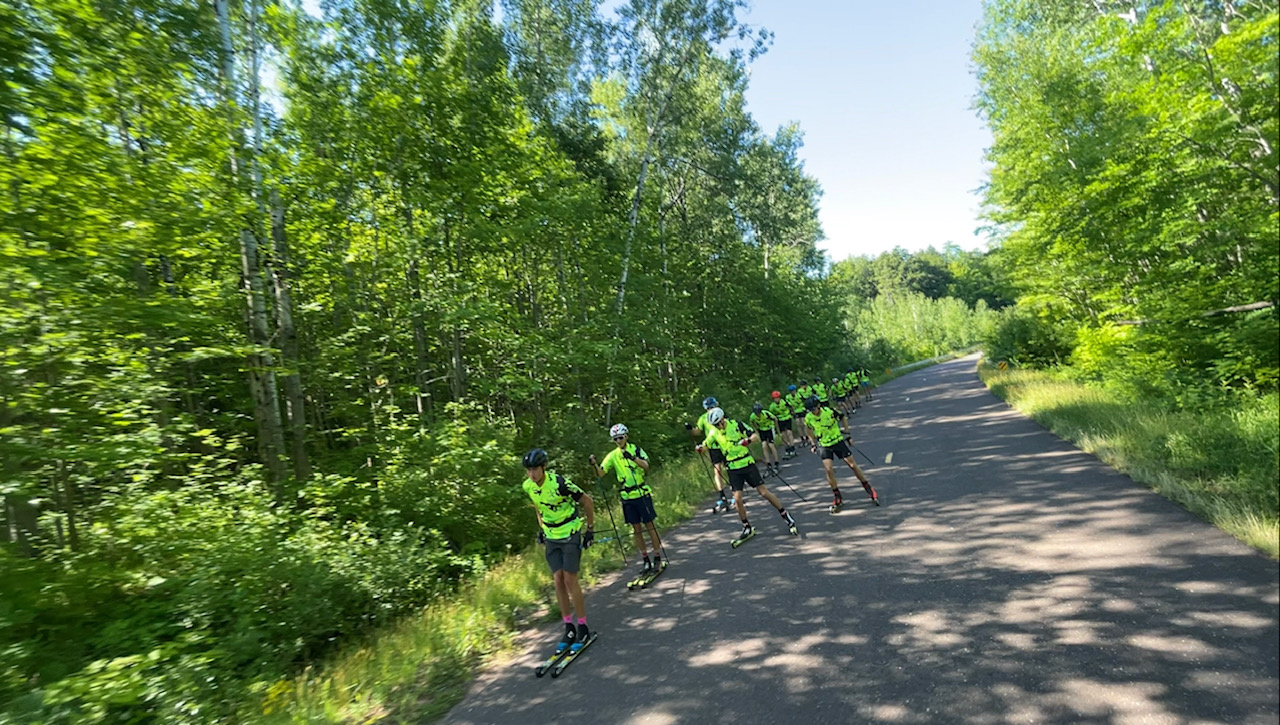 Train of the boys going out on the OD rollerski. 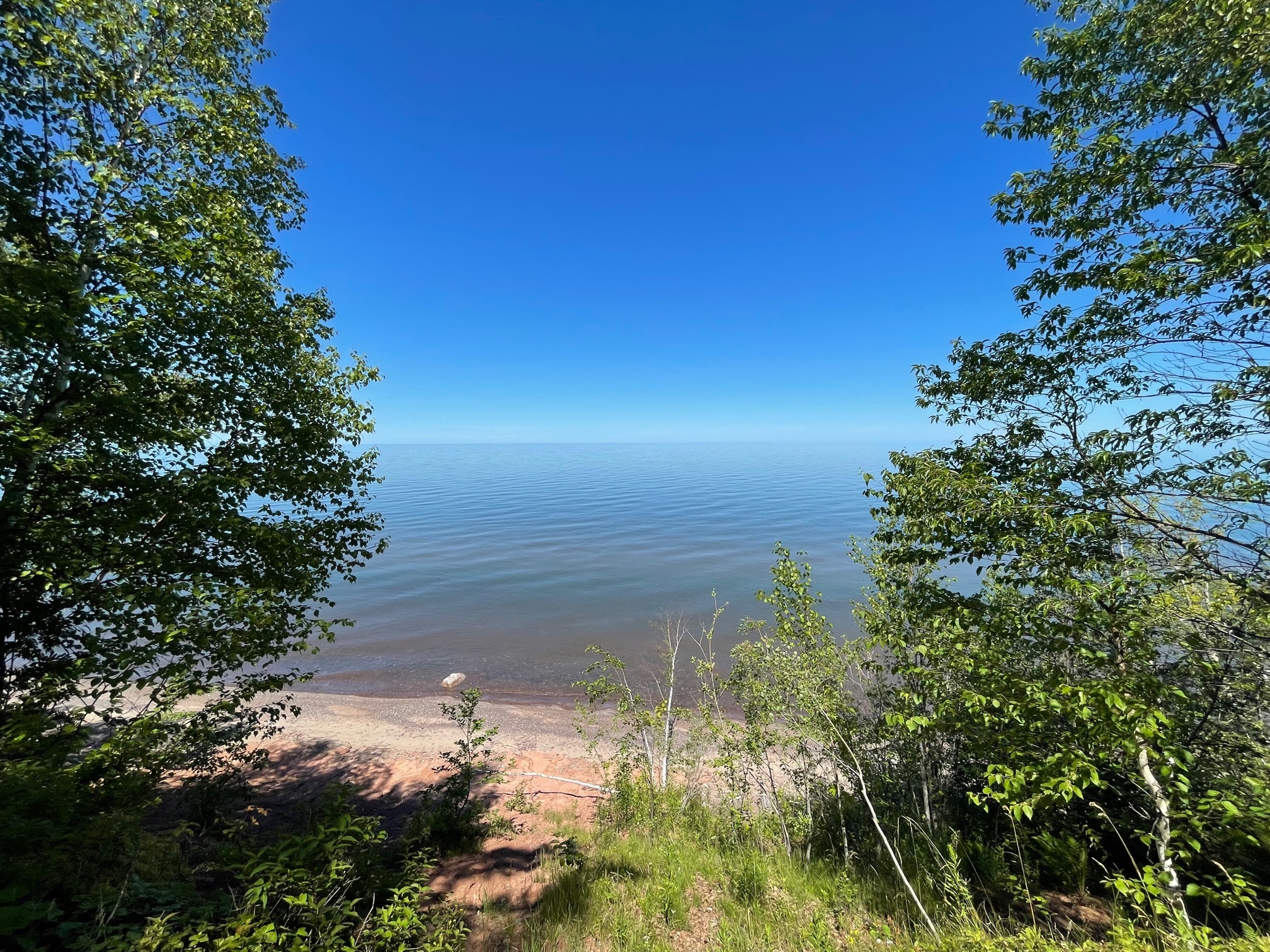 Spectacular day to be out on Lake Superior.

Day 5 – On Saturday, Team Birkie departed from the REG training camp a couple days early to head south for the Rice Lake Shoreline Sprints. When Out There Nordic reached out to us asking if we would be interested in joining an elite sprint race held in the area, we did not second guess the opportunity. We made arrangements with Bjorn and Kris Hanson to host us at their inn and we spent the day preparing for the races. The format was great and the course layout/conditions were spectacular. I even was able to hop into the races for my first sprint race since my senior year of college back in 2013 and managed to find myself in the money finishing 6th place in the finals. I used the advantage of tactics in the heats, followed by riding Zak Ketterson as long as I could in the semi’s to push my way into the finals. Also special shoutout to Emmitt and Henry of the Sugar Bros lemonade stand that kept me hydrated between rounds! 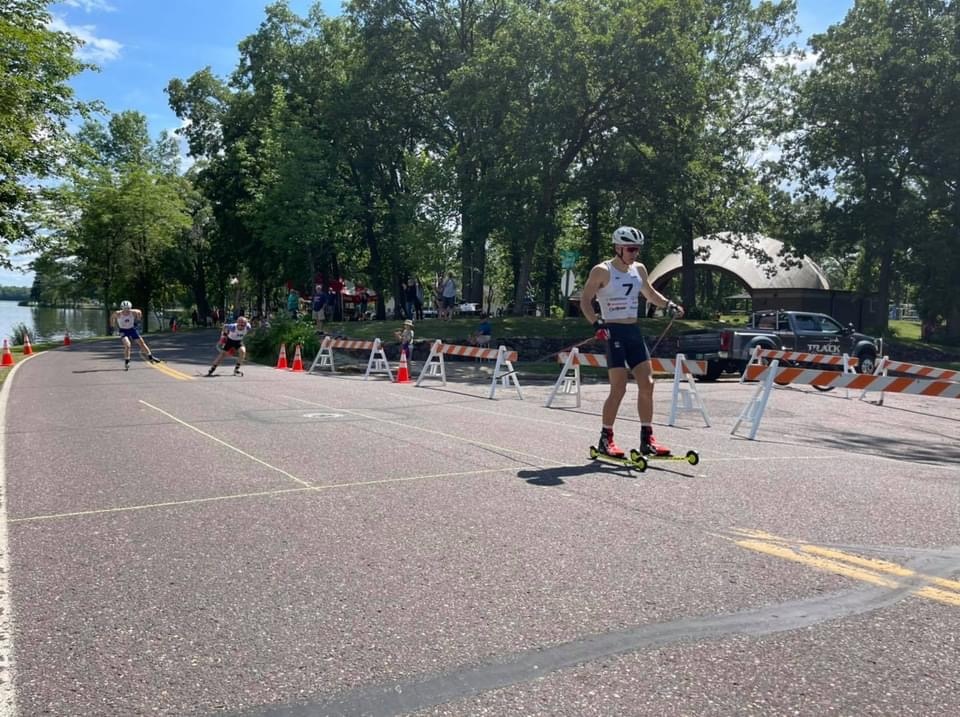 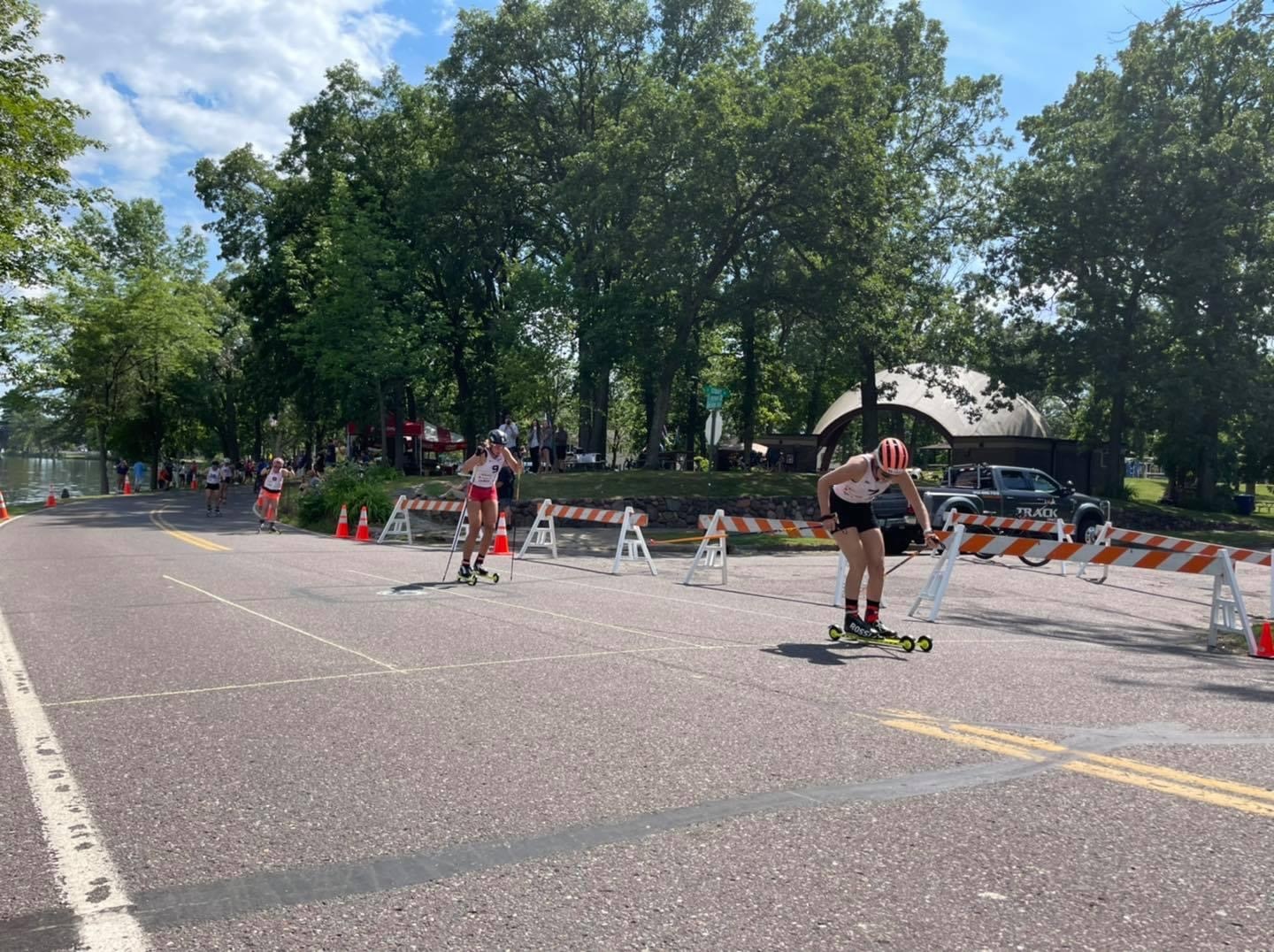 Nicole Bathe coming out of retirement to take the dub ahead of Amanda Kautzer and Caitlin Gregg. (Photo Credit: CXC Skiing)

Day 6 - The last day of the training camp wrapped up with an additional combo OD. This was my first time training in Rice Lake and the skiing was fantastic. Out There once again came through big not only giving us a great place to train, but also coming out to help support the workout. It is great to see such engagement from the ski community to help support the newly formed Team Birkie. Bjorn and Kris set up a great loop that had 20-25 mile options along rolling terrain with quiet, smooth pavement. If you are looking for a retreat to roller ski – this would be a great area for it! After the roller ski, we had the chance to hop on the Ice Age trail for a run but was quickly turned around as the flies have taken control of everything in the woods. We finished the run on the same roads we skied on. 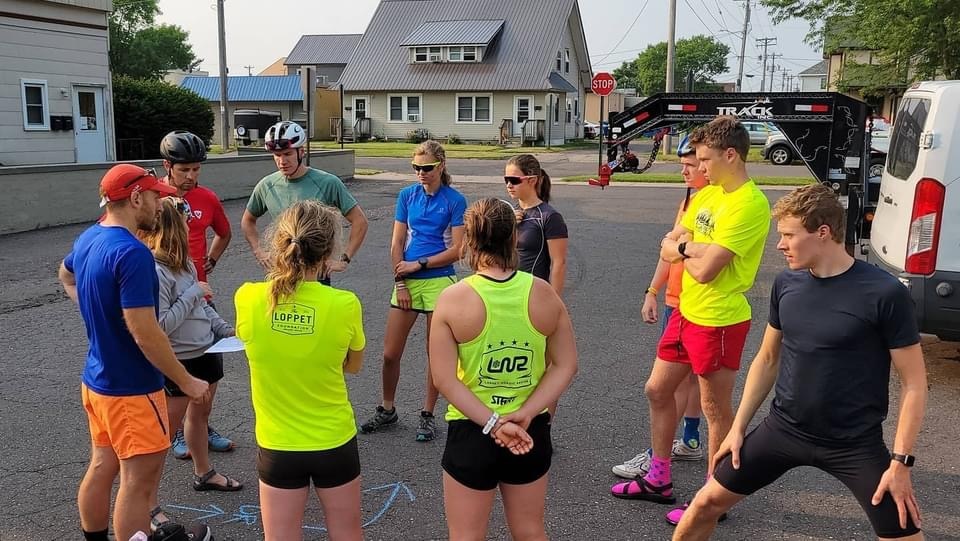 Kris Hanson giving a pre-workout brief discussing the route options for the day. (Photo Credit: Out There) 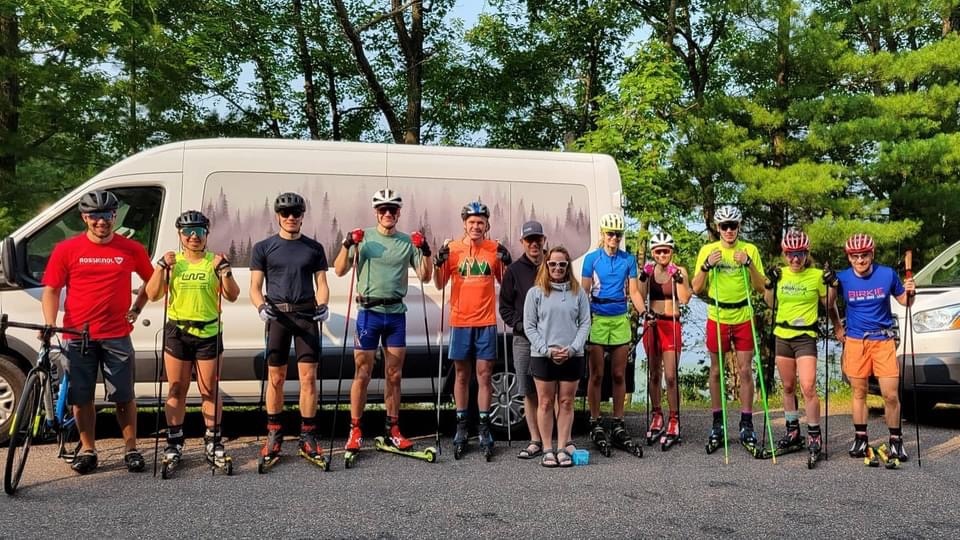 Entire group ready to go out on the big ski! (Photo Credit: Out There) 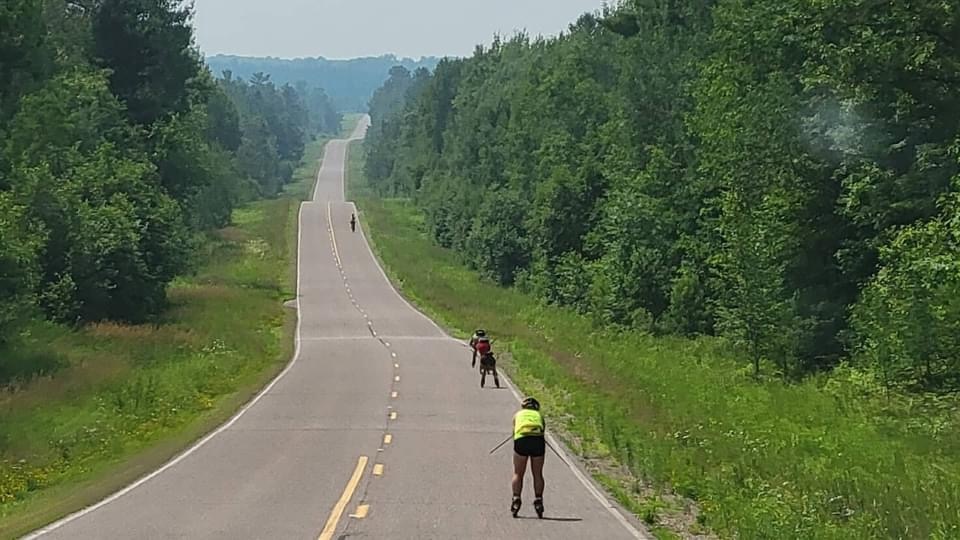 Just a glimpse of the rolling roads we skied through the morning. (Photo Credit: Out There)

With the camp finished, I thought the athletes all made some great progress towards their goals. I was definitely a tired coach at the end of the camp, but am excited for the next one! Team Birkie will be traveling to Bozeman, Montana for the last two weeks of August for another training camp. The focus of this camp will be on volume and getting some hours in at altitude. With the Senior National Championships taking place out in Soldier Hollow in Utah this January, the athletes will need to be prepared and ready to take on the challenges of racing at higher elevations. Getting two weeks in during the summer will help give us valuable experience learning how the body reacts to training at high altitude. Look forward to the second installment of “Adventures from the Coach” coming out in August when I return from the training camp.